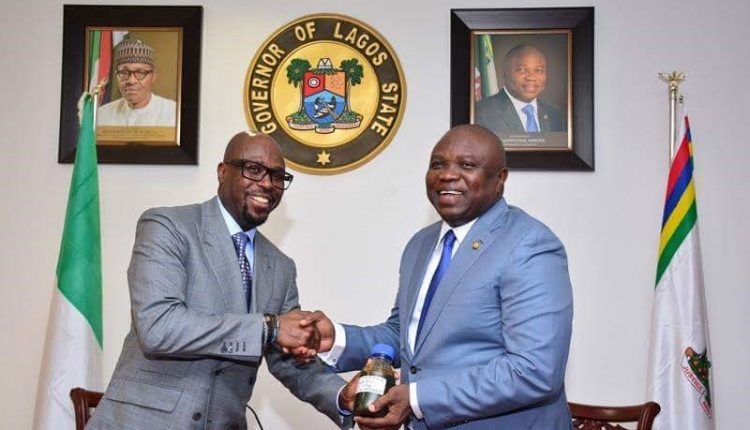 …To Commence Disbursement of 13% Derivation Fund To State

Lagos State Governor, Mr. Akinwunmi Ambode on Wednesday said that the commencement of crude oil production in the State would in no small measure enhance the economy of not just the State but the nation in general.

The Governor, who spoke when he received the Chairman and members of the Indices and Disbursement Committee of the Revenue Mobilisation Allocation and Fiscal Commission (RMAFC) on a courtesy visit to the Lagos House, Ikeja, said that it was significant for the Nigeria economy that the State has emerged as the first oil producing state outside the Niger Delta basin.

He described the visit by the committee as remarkable in the annals of the history of Lagos, adding that it signals the official step that takes the State to the final destination that makes us to become an oil producing state.

“We are very glad to receive this delegation. We also want to thank the Federal Government, most especially President Muhammadu Buhari for making this to happen very promptly. I want to say that this has been the quickest action that has been taken by RMAFC since I have known the Commission.

“I used to be a former Account General so I had a lot of transactions and relationship with the institution called RMAFC. Within a span of about 60 days of when we wrote our letter, and even before we wrote the letter, this technical committee was set up. It gladdens me to say that the institution works and is working for the good of Nigeria,” the Governor said.

Governor Ambode also commended the members of the Department of Petroleum Resources (DPR) and the Boundary Commission, saying that both have contributed immensely to the process of the discovery and production of crude oil in Lagos.

While alluding to the fact that the feat in Lagos has kick-started the path to diversification of oil production in Nigeria, the Governor urged other states in the federation to begin to activate the mineral deposits in their domain as a means to boost their Internally Generated Revenue (IGR).

“It would also give us revenue independence in a manner that there would be equal growth from all the nooks and corners of Nigeria. I am happy that RMAFC has taken this step and also to say that they should also encourage other states to engage in such activities that would allow them to be able to activate whatever mineral deposit that we have in the various states in conjunction with the Federal Government, so that we can start to diversify revenue and growth and then create a balanced growth and development for the whole country,” Ambode said.

Earlier, Chairman of the Committee, Alhaji Aliyu Mohammed said they were on a working visit to Lagos to verify crude oil and gas production from Aje Oil Wells for the purpose of disbursement of the 13 per cent Derivation Fund to the State in line with the constitution of the Federal Republic of Nigeria.

He said the Commission had set-up an Inter-Agency technical Committee comprising of the RMAFC, DPR, Office of the Surveyor General of the Federation and the National Boundary Commission to determine the location of the Aje Oil Wells.

Mohammed said that the Technical Committee recommended that for the purpose of the Derivation Fund as spelt out under Section 162 (2) of the 1999 constitution as well as the provision of the Allocation of Revenue Act 2004, number 1, 2, 4 and 5 of the Aje Oil Wells fall within 200m isobaths and therefore should be attributed to Lagos State.

He said as a result, the Commission and members of the Inter-Agency Committee had to embark on the working visit to the Oil Wells to conclude the process.

He added that the outcome of the visit would promote national unity as well as the socio-economic development of Lagos State and Nigeria.

“It is also important to state that the commencement of oil production from Aje oil field by Yinka Folawiyo Petroleum Company Limited is the first time oil is being produced outside the Niger Delta basin and therefore of a significance in diversifying the source of crude and gas production in the country,” Mohammed said.

Get More Oil and Gas News in Nigeria on Orient Energy Review.