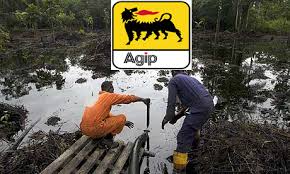 The people of Kalaba community in the Niger Delta state of Bayelsa, have confirmed that the Nigerian Agip Oil Company (NAOC) has finally carried out repairs on its ruptured pipeline in their environment, about one year after the oil spill occurred on the facility.

The spill was said to have been caused by a third party interference which breached the facility. The damaged point on the pipeline continued to spew crude oil and gas into the community’s environment since July 30, 2019 when the incident happened.

Spokesman of the community, and chairman of the Kalaba Community Development Committee (CDC), Mr Samuel Oburo, confirmed that NAOC mobilised to site around the end of May this year.

The oil spill was said to have devastated the ecosystem of the impacted area as its spread was aided by the heavy rains of last year.

He claimed that the oil firm’s eventual response followed intense pressure the community mounted on its management through petitions to the National Oil Spill Detection and Response Agency (NOSDRA), the Bayelsa State Ministry of Environment and advocacy by the Environmental Rights Action/Friends of the Earth Nigeria (ERA/FoEN).

“After the incident, we made series of attempt trying to reach Agip through some groups, even NOSDRA and ERA/FoEN, to be specific. We believe the message was passed to the company by ERA/FoEN through the media. So, like I said, this spill happened on the 30th of July, 2019 and they (Agip) came for repairs on 31st of May, 2020. Joint Investigation Visit (JIV) was conducted (on the oil spill) that same day.

“But since it was a major repair job, it took them three days to complete the task. The maintenance job was concluded on 2nd of June, 2020.

So, you can see it took them about one year interval. Ordinarily, it ought not to be so. We wrote a letter to the regulatory agencies, NOSDRA and the Bayelsa State Ministry of Environment and they came,” he said in a statement.

We Have Developed the Right Energy Mix for Nigeria- Fashola

According to him, the JIV team was made up of representatives of the federal and state ministries of environment, NOSDRA and the Department of Petroleum Resources (DPR).

While thanking the environmental rights group and the media for the advocacies, Oburo urged the NAOC to clean-up spilled crude oil in the area “in line with industry regulations, irrespective of cause of spillage.”

The community urged NOSDRA and the Ministry of Environment to follow-up to ensure that this is done, by reaching out to NAOC and the impacted community for confirmation on whether the environment has been cleaned up”, the CDC chairman added.

Other Oil and Gas Industry News On Orient Energy Review