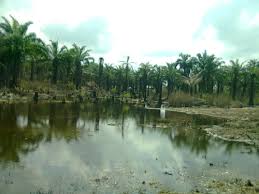 The National Oil Spills Detection and Response Agency (NOSDRA) over the weekend said that the two spills from Agip’s oilfields in Southern Ijaw and Brass Local Government Areas (LGAs) were cause by equipment failure.

This development was confirmed by the Director- General of NOSDRA, Mr Idris Musa.

According to the D-G officials of the spill agency conducted a Joint Investigative Visit (JIV) to Agips 10″ Cough creek-Tebidaba pipeline at Ologbobiri in Southern Ijaw LGA and found the cause to be equipment failure.

Musa said that officials of the agency also visited the 24″ Ogoda-Brass trunk line site at Okpoama in Brass where a leak discharged a yet-to-be ascertained volume of crude oil into the environment.

The people of Okpoama in the Brass LGA have sent a ‘save our soul message’ to the Federal Government of Nigeria following widespread pollution by the oil spill incident in the area.

It was gathered that the oil spill occurred two weeks ago on the 24-inches Ogoda-Brass crude oil trunk line operated by the Nigerian Agip Oil Company.

The Chairman of the Okpoama Kingdom Oil and Gas Committe, Percy Jerry Wemi-Kwomain, said that the incident happened at the Amangaetima bush near Ewoama-Brass.

“The oil spill occurred two weeks ago and it has discharged enormous amount of crude oil into the adjourning creeks and rivulets, thereby affecting the environment and the livelihood of the people of the area.” Wemi-Kwomain said.

According to him, the NAOC made two attempts secretly to fix the leaking pipeline without the usual Joint Investigation Visit (JIV) conducted by the relevant authorities concerned.

He said the efforts were twarted by youths placed on surveillance in the area.

“Without letting us know they came with a swamp-buggy to fix the leaking point. We stopped them twice before they came to inform us that they want us to join them for the JIV.

“The oil is still leaking, that was why we have sent SOS to the Federal Government to come to our aid”, Kwomain added.

The community leader further noted that the high pressure pipeline was built sine 1972 and had recorded failure in several points.

Reacting on the disagreement between Agip and its host communities, the NOSDRA D-G told Orient Energy that the JIV was done and concluded amicably.

“The host community wanted to be paid a fee before repairs. That was the source of the disagreement, but the matter was later resolved,” Musa said.

Officials of Agip declined comments on the two incidents and efforts they have made to mitigate the pollution.