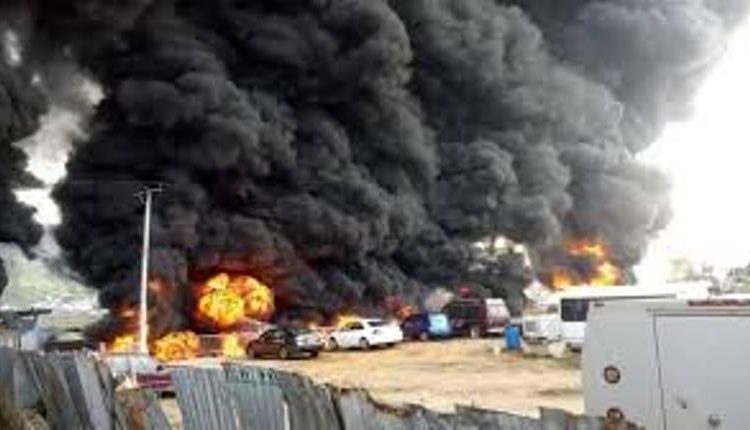 Four persons have been reportedly burnt to death while several others sustained various degrees of injuries in an early morning fuel tanker explosion in Abeokuta, the Ogun state capital.

Orient Energy Review gathered that the incident, which occurred on Tuesday around 8:20 a.m. along Presidential Boulevard Road, Guarantee Trust Bank in Kuto, Abeokuta, led to the burning of dozens of cars.

According to an eye witness account, the tanker which was coming from Sagamu-Siun-Oke-Mosan Road had a brake failure as a result descended from the over-head bridge.

“The tanker later rammed into scores of cars before it eventually exploded. It affected some offices in the area including that of the Guaranty Trust Bank,” Seun Okeowo said.

Confirming the incident, the Ogun State government, in a tweet urged residents of the state capital to avoid passing GTB, Kuto Road due to the explosion.

“Motorists within Abeokuta metropolis are advised to avoid GTB, Kuto Road for now. A fuel tanker has caught fire. The situation is being attended to, as we speak.”

Also, the Ogun Commissioner for Special Duties, Barr Femi Ogunbanwo, who was at the scene of the incident said that the injured persons have been taken to hospital and are being treated on government expenses.

He also assured that investigation is ongoing on the cause of the incident to avert re-occurrence.