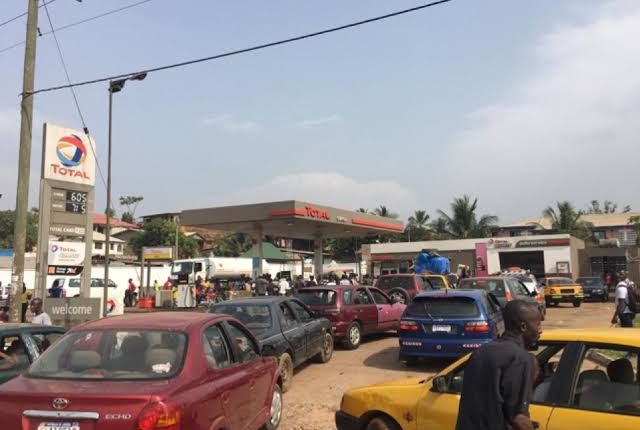 Purchasers of gasoline in Liberia are wondering at the skyrocketing cost of the product; whereas the sales at the streets flourish at the expense of gas station pump sales.

Liberian Observer reported yesterday that a gallon of gasoline, which previously sold for L$650, was sold on Monday, January 27, 2020 for L$1,600 in Gbarnga town.

The report said that in spite of the soaring price of the product, getting access to the product remains a bigger challenge to citizens. Total Filling Station, from the stock of the French oil giant, Total Oil, which usually provides gasoline and other products, reportedly shut its doors, alleging that black market operators are profiteering from their business.

According to the report, those in the act, who bought gasoline from Total for L$650 per gallon, are reselling the same quantity for L$1,600 or above.

The Liberian Observer report said some commercial drivers and motorcyclists who managed to reserve few gallons or litres are reportedly taking advantage of the situation to exploit the ordinary citizens who are finding it extremely difficult to commute from one point to another.

“Transportation fare from Gbarnga to Cuttington University, which normally costs L$150 on both taxi cab and commercial motorbike, now costs L$500,” the report said. Quoting an investigation conducted on Monday, January 27, 2020, the paper said it established that a litre of gasoline previously sold L$170 is now sold for L$400, while half a gallon is also sold for L$800.

“The Total Filling Station in Gbarnga has closed its doors because of sidewalk vendors who bought gasoline from Total for L$650 per gallon and are selling it for L$1,600 or above. It has also been observed that many who use generators at night at to light up their homes or businesses were in complete darkness since Sunday, January 26, due to the unprecedented gasoline shortage,” the report said

Meanwhile, normal traffic activities are said to have been paralyzed in the Central Town of Gbarnga as a result of the acute shortage of gasoline and the unprecedented hike in price of the product on the local market. Every L$20 distance on commercial motorbike is now triple the price or more, especially during the night hours, the paper said

Night clubs were over the weekend virtually empty and commercial sex-workers or prostitutes, who frequently gathered at these entertainment centres to hunt for customers did not mince words to express their frustration. “There is no gas in Gbarnga, the only institution that has small gas is Total and Total has closed its doors because most of our colleagues are making double profit at the detriment of the ordinary people” Isaac Beyan, a street gasoline seller, admitted.

At the Super Petroleum (SP) in Gbarnga, it was also observed that a gallon of gasoline is being sold for L$ 850, but authorities at that the station declined to comment arguing that their boss was not in Gbarnga and that he is the only person allowed to comment on such issue. “If the shortage of gasoline lasted for a week in Gbarnga, most of our children will not go school” a middle-aged woman stressed.

When contacted on Monday, January 27, 2020, an Inspector at the Ministry of Commerce and Industry Gbarnga Office, Adolphus Moses Dolo, in a rather harsh statements said beginning Tuesday, January 28, 2020, his Ministry will begin to close down filling stations that are detected of having gasoline but have refused to sell it to the public but are selling it under the cover of darkness to exploit the ordinary suffering citizens, adding, “under my watch, we will arrest and close down any filling stations that have been suspicious of having gas or fuel oil.”

“And if we arrest you, remember you will not go free because you will be charged and made to pay a fine in government revenue,” Dolo declared. He, however, failed to state the fine for would-be violators.