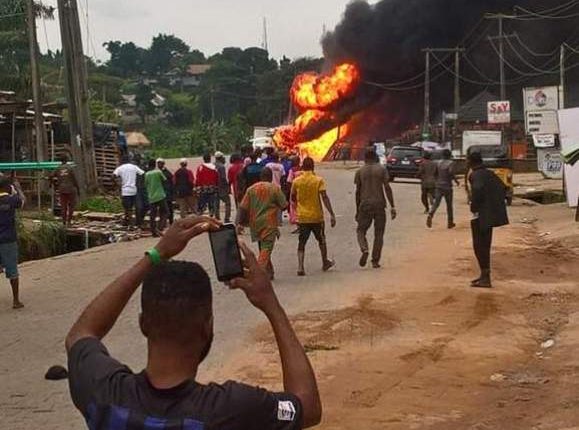 No fewer than 30 persons suffered varying degrees of injury from the explosion that rocked Iju Ishaga area of Lagos on Thursday afternoon.

The Lagos State Emergency Management Agency, LASEMA said that 15 vehicles and 23 buildings were destroyed in the explosion. It listed some of the affected buildings to include K and Y Event Centre, a church, a plank market among others.

LASEMA spokesperson, Nosa Okunbor, said “On arrival at the scene, it was observed that there was a gas explosion.

“Further investigation revealed that a truck had a lone accident and exploded. The impact of the explosion affected adjoining buildings and several vehicles were burnt.

“It was confirmed that a 30 ton LPG Tanker being operated by Mana Gas Ltd was involved in the explosion which injured 30 persons – 20 adult males and 10 adult females.

“A total of 23 buildings and 15 vehicles were destroyed. The disaster losses are two residential buildings, church – one, event centre – one, commercial buildings – four, market- one (consisting of 15 shanty shops), cars – 11, mini trucks – two, bus – one, heavy-duty truck – one.

“Sixteen people were found to have serious injuries and were taken to various hospitals, including Iju water works clinic. Two people out of the above 16 were referred to General Hospital. They are in critical condition.”

“The impact of the explosion led to fire at adjoining buildings and several vehicles were burnt. Several persons were injured and have been taken to the nearest hospital for treatment.

“The inferno is being tackled head-on by the combined efforts of the LASEMA Response Team led by the Director Operations, LRU Fire, LASG Fire Service, Nigeria Police Force and NSCDC.”.

The deafening sound jostled residents who scampered from their houses to different directions for safety.

The acting coordinator of the National Emergency Management Agency, Ibrahim Farinloye, said the gasoline-laden tanker was trying to enter a gas plant at Iju and exploded before entering.