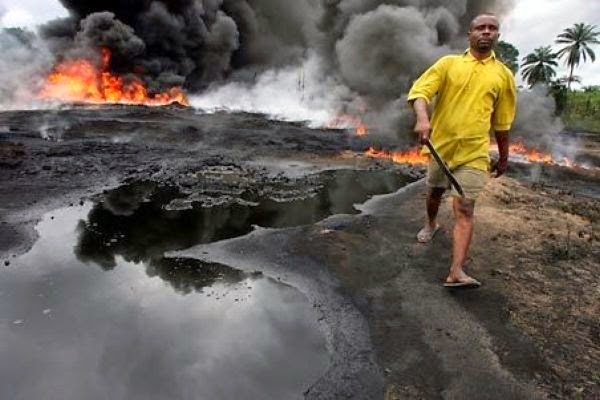 By Jolly Adjewe – from Port Harcourt

Bodo City in Khana Local Government Area of Rivers state went agog in joy and celebration as Shell Petroleum Development Company (S.P.D.C) of the Royal Dutch Commences its clean up and remediation activities in the polluted lands of Bodo and its environs.

This is coming as an after mart of the agreement reached on the out of court settlement in which S.P.D.C agrees to pay 55 million to the Bodo community, this Shell has paid to the people.

Speaking at a town hall meeting/flag off of remediation activities in Bodo city/former Dutch Ambassador to Nigeria Mr Bart Ronhaar promised the resident of Bodo that adequate clean-up, rehabilitation, restoration of lost economic activities. According to him, “this flag off starts a signal of our remediation process in Ogoni land, especially in Bodo City and its environs. Remediation starts between people, therefore all hands must be on deck to make it work. We are looking forward for full co-operation from the community involved”

He noted that, “full clean-up processes takes along time to achieve, which is why we have brought the best expert that will drive the process, so that the mangrove and their aquatic lives of the environment can be brought alive.

He said further that over three hundred youth would be trained, employed and given certificates by SPDC so that they can work in any oil and gas company even and after the remediation process must have been completed, saying that adequate measure would be taken in order to prevent re-pollution of the creeks after the clean-up.

The former ambassador advice Bodo people to stop any form of pipeline vandalism, bunkering, local refining of crude oil, stressing that such acts would hinder the smooth process of proper clean-up activities in the land.

Exxon Mobil’s Fading Star: No Longer the US Biggest Energy…

Also speaking at the occasion, Dr. Livinus Bariko, Deputy Chairman Remediation Committee started that Bodo people are ready to embrace the clean-up and remediation exercise on their land adding that the people were willing to welcome total restoration of their lands.

In an interview with Orient Magazine Correspondent Dr. Livinus Bariko said “Bodo people are not greedy, they are generous, promising that they would carry other neighbouring communities along just as it did during the compensation funds disbursement. The Bodo clean-up will also serve as a gate way for the implementation of the United Nation Environmental Programme (UNEP) report in Ogoni lands

The General Manager, SPDC Sustainable Development and Community Relations Mr. IGO WELI express optimism that Bodo community would be restore following the bold steps they have taken to support the clean-up exercise, especially the leadership of the community and the remediation committee.

Mr. INEMO SAMIAMA, Country Director SDN/CO-CHAIR BODO MEDIATION PROCESS thanked the Bodo people for showing full commitment to the process. In his words, “I must commend your effort as a people showing great interest in the whole process. I know this issue will soon be a thing of the past”

In an address presented by the Bodo Council of Chiefs and Elders at the occasion, Mene Sylvester Kogbara, said that their hope of succor came in 2003 when at the peak of discuss of whether to do a pilot or comprehensive clean-up of their devastated environment, pointing out that, “at this point the government of Netherlands informed us that they will carry out a comprehensive clean-up, and we were very happy”

He express gratitude to Mr. Ronhaar Bert describing him as their hero for his firmness to restore Bodo community and bring hope to the hopeless. In his words, “Bert Ronhaar is our hero because we were aware of an attempt to scuttle the process but the great man resolve to take his stand with the hopeless people of Bodo community, the victim of unprecedented hydrocarbon exploitation. We believe that you are the instrument of divine intervention to restore our lost heritage”. Chief Kogbara pleaded with the remediation team to complete the present joy which Leigh & Co has put on their faces, as they eagerly expect the actual take-off of the clean-up and remediation.

It could recall that the impact of oil spill in Bodo community has affected Economic and main source of livelihood of the people due to equipment failure of SPDC. The SPDC a Shell subsidiary had admitted liability for spills of 4,000 barrels caused by operational failure, But later withdrew those estimate conceding, the underestimated extent of the leakage.

Later, SPDC agreed to pay tens of millions of pounds in compensation to 15,000,000 fisher men affected by two huge oil spills. The out of court settlement believed to be the biggest of its time ends a three year legal battle. SPDC also have paid an average sum of 2,000 pounds to each of the fisher men in Bodo city and its environs has compensation package worth 55 million pounds.

The deal settles a law suit brought against Shell in London over leaks in Bomu-Bonny pipeline that cause environmental damage to coastal settlement of over 49,000 people living in 35 villages many of whom are subsistence farmers and fisher men. Some 15,600 people including 2000 children had been paid compensation averaging 2,200 pound in the last two month.

Commenting on the above interface between SPDC and Bodo community Dr. Nenibarini Zabbey a stakeholder in the community said that SPDC have tried in all ramifications in settlement the people of Bodo city.