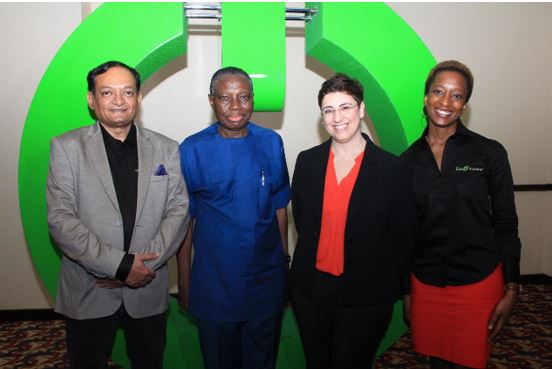 “…we are very proud of the robust nature and broad spectrum for application.”

Schneider Electric recently launched a range of speed drives into the Nigerian and West African market in Lagos. These energy efficient drives are targeted at four market segments, which include: Building, Industry, Information Technology; and Infrastructure.

Addressing Orient Energy Review’s team after the launch, the Vice President for Middle East & Africa, Anthony Pickering said, “The Altivar Process Drives is the flagship product and we are very proud of its robust nature and broad spectrum for application.” He went on, “these range of products gulped some huge investments; because, as a practice we spend 5% of the company’s revenue on Research & Development annually.”

Aware of today’s evolving technological demands of industries, Pickering further added that Schneider’s research team has some Tested, Validated, and Documented Architectures (TDVA) solutions which could be picked off the shelf and specially integrated into some specific applications for deployment in the oil and gas industry. This is in addition to its M-580, which monitors fluid movement, already unveiled at the launch. Beside the oil and gas industry, reception of this range of products is expected to be huge in the Building segment.

Again, he added that the speed drives solve the issues of connectivity as they are able to “integrate into the entire eco-xtructure of facilities, run diagnosis, generate data and predict system failures in order to avoid downtime which stems largely from the usual speculative approach”.

On being asked how existing, mere mechanical systems, perhaps manufactured by a different original equipment manufacturer (OEM) could function with these new drives; the Vice President hinted on the special features of the products, which includes the OPC that enables easy migration thus making such equipment(s) “intelligent” and able to communicate.

Also speaking at the launch, Ana Santos, the Vice President of Process Automation, Northern Europe and sub-Saharan Africa stated that 95% of its engineering integrators are Nigerians. Confirming that all resources are trained to Schneider’s global standard without any disparity, such that the human resources based in Nigeria has the same skill set as the UK-based. She added,

“This was achieved because, over the years, the company has planned to have execution centres in different regions, and Nigeria happens to be one. That process has witnessed international training of indigenous Nigerian engineers as a drive towards local content value addition”. Ms Viviane Mike-Eze (Marketing Communications Manager) was quick to aver that the inclusive model of the company makes room for the training of local vendor system integrators.

Its West African Lead Solution Architect Ibitayo Balogun, also pointed to the early days of the electricity distribution companies in Nigeria; how specialized solutions deployed by Schneider helped some of these companies manage their revenue. Adding that similar solutions are available for efficient power consumption and auditing to companies, because “energy saved is energy generated”. He also stated that the average return on investment for users of these product ranges is often a year, at most two.

Schneider Electric, a leading digital transformation energy management and automation company worth over 25billion Euros with its headquarters in France.

Renewable energy now accounts for a third of global power –…