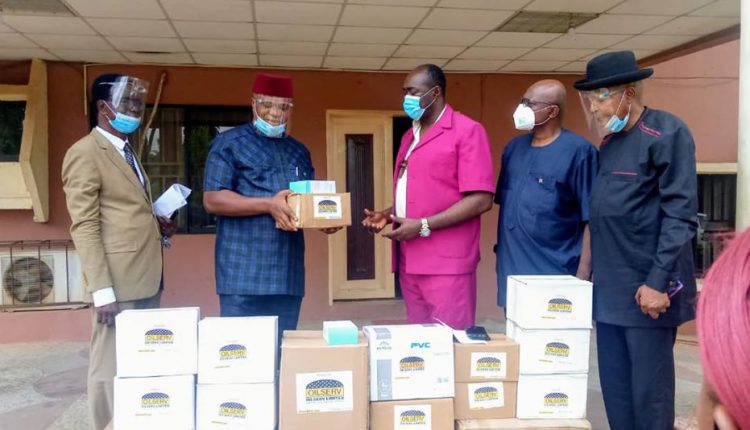 Oilserv Limited in conjunction with Sir Emeka Okwuosa Foundation have distributed COVID-19 containment items and personal protective equipment worth over one hundred million naira to churches in Oraifite town and Dioceses in Anambra State.

Oilserv in a statement said that gesture was to support the efforts of the church and government in the fight against COVID-19 pandemic in the state.

The flag off of the distribution took place at Umueshi-Irefi village square. The medical supplies and personal protective equipment were also extended to Anglican and Catholic Dioceses of Awka, Niger/Onitsha, Aguata, Nnewi.

In his remark, the Executive Director of Sir Emeka Okwuosa Foundation, Sir Azuka Okwuosa said the foundation was established in 2011 by Engr Sir Emeka Okwuosa with the mission to help individuals and communities become self-reliant and realise their full potentials by providing access to fundamental needs such as quality health care, education, security and sustainable development.

He recalled the food items earlier distributed to various communities in the state to cushion the effects of the COVID-19 lockdown and advised people to continue to adhere to Federal and State government guidelines in fighting the disease.

Receiving the medical supplies for the diocese, the Archbishop, Province of Niger and Anglican Bishop of Awka, Most Reverend Alexander Ibezim, said the church has been sensitizing the people on the need to observe COVID-19 protocols. Adding that the gesture will complement the efforts made so far to contain the pandemic.

Archbishop Ibezim on behalf of all Anglican Dioceses in Anambra state thanked Sir Emeka Okwuosa for his generosity and described him as a man sent by God at a time like this to give succor to the helpless and praised his passion to touch lives.

The Catholic Bishop of Awka diocese, Most Reverend Paulinus Ezeokafor who also received the COVID-19 containment items for his diocese at St. Patrick’s Cathedral, Awka thanked the donor for making life meaningful for the less privileged.

The Catholic Bishop of Nnewi, Most Reverend Hillary Odili-Okeke told the foundation that they are doing the biddings of Jesus Christ and expressed gratitude to the foundation for including the diocese in the distribution, praying for God’s blessing on the donor; Sir. Engr Emeka Okwuosa.

The coordinator of the foundation, Professor Johnson Anene on his part called for judicious distribution and use of the items. In their separate comments, Reverend Father Hyginus Ajiero of School of Deaf and Dumb, Amakom and Chairman, Pentecostal Fellowship of Nigeria, Ekwusigo branch, Reverend Christian Osondu who noted the effects of COVID-19 on the church, prayed God to bless the donor while Reverend Canon Chamberlain Igwenazo of All Saints Irefi-Oraifite led in short exhortation and prayer for the foundation.

Africa to Come Second in FCCU Capacity Additions by 2024 – GlobalData