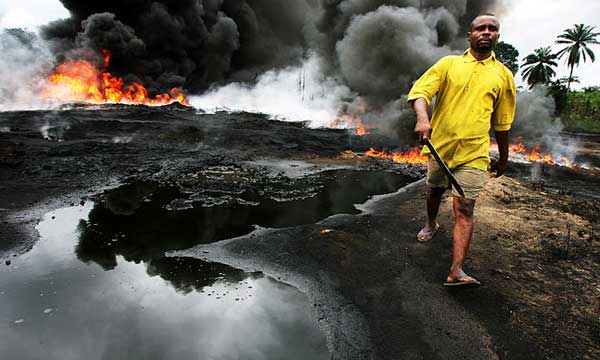 Following speculations making the rounds with regards to Amnesty international’s decision to release a new report indicting Shell over the Ogoni cleanup, the Anglo-Ducth Oil giant has denied any wrongdoing in the clean-up process and insisted that no clean up is possible while illegal bunkering and pipeline vandalism remains a regular practice in the area.

According to shell “you cannot mop or clean the floor while the tap is running, as all attempts in that regard would remain futile”.

The Company stated further that the UNEP report was very clear in its recommendations to bring about a sustainable clean-up exercise in Ogoni land. The report stated that the federal government should take the lead in a multi-dimensional clean-up approach involving all stakeholders including Shell, but Shell is expressing worry over Amnesty international’s decision to single it out for the clean-up when the UNEP report was very clear on its recommendations.

Speaking on the development, spokesman of SPDC, Precious Okolobo said: Without having access to the report it is difficult to respond to these issues in a thorough manner.

“Implementation of the UNEP report is part of a wider programme of remediation, pipeline protection, community engagement and social investment activities being undertaken by the SPDC JV with its government, community and civil society partners in Ogoniland.

These include grassroots campaigning on the health and environmental impacts of crude oil theft and illegal refining in all four local government areas of Ogoniland; implementation of alternative livelihoods programmes, including an agricultural entrepreneurialism scheme focused on Ogoni youth; and technical support to the Eleme water project, which is now administered by the Rivers State Government.

“SPDC JV is committed to cleaning up all spills from its facilities, irrespective of cause. This is equally the case in Ogoniland, despite the fact that we ceased producing oil and gas there in 1993. As the UNEP report stated, it is crucial to put an end to the widespread theft and illegal refining of crude oil, which continue to cause new spills and impact on the environment. Ensuring long-term sustainability remains a challenge that will require coordinated and collaborative action from all stakeholders.”