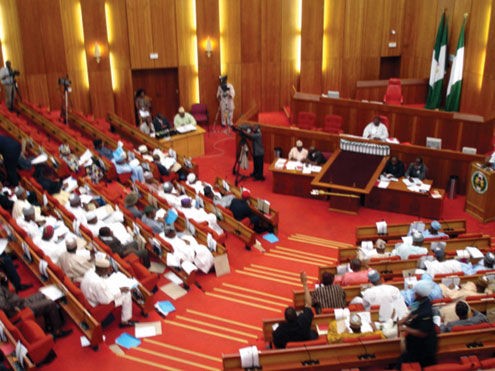 The Nigerian Senate has asked the Federal Government of Nigeria to urgently initiate and implement the First Option Policy on purchase of locally manufactured products for government procurement in all arms of government.

The upper chamber said that the policy should also be extended to every public funded organization.

This followed a motion by Senator Enyinnaya Abaribe (Abia South) entitled “Need for patronization of made in Nigeria good in Nigeria.”

Senator Abaribe, in his lead debate, expressed concern that investment in real sector had given way to trading in foreign and imported goods resulting in negative balance of trade, close down of textile companies, wood processing factories among others.

The Abia State born lawmaker recalled that Nigeria’s economy was dependent on made in Nigeria exports, in the 60s and early 70s.

He noted that in the 60s and 70s, industries were located in the rural areas, while made-in- Nigeria products were popular in parts of the country and many other African countries.

Why Cape Town is home to South Africa’s most important…

“Today, only 12 are still functioning, the resultant loss of opportunities and employments is anyone’s guess.

“The current depletion in forex earnings and forex available is a symptomatic effect of an import dependent economy, which is riddled with unemployment, negative balance of trade and low capital formation.”

Abaribe noted that governments in other countries have developed and adopted varying measures of First Option Policy for their locally manufactured goods in their various countries.

He listed countries like the United States, Chinese, and India, as some of the countries that made it mandatory for government agencies to source for locally manufactured goods before patronising goods from other countries.

The lawmaker expressed optimism that if the present administration put measures in place to ensure obligatory official patronage of locally made products for all agencies of government, it would create jobs for the teeming population.

Most Senators who contributed supported the motion and insisted that urgent action should taken by all arms of government to encourage the growth of made in Nigeria goods.

“It’s beyond having one made in Nigeria attire and you have over 70 Tom Ford and Loubitins in your wardrobe.

“We must reduce the allocation for made in Nigeria goods and services to the basics. What are those factors limiting the production of this goods. We must tackle them.

“We must also begin to look at our legislation; we will begin to talk about made in Nigeria goods.

“Apologies to my uncle, the governor of Edo State, we must as a people stop paying dowries in dollars and pounds.  It is time for my colleagues here to become born again.”

Senate President, Abubakar Bukola Saraki, commended Abaribe for his commitment for promotion of made-in-Nigeria products over the years.

He said, “I had the opportunity to attend this year’s Made-in Aba trade fair, which Abaribe has been promoting using his own intervention fund.

“It is commendable to see that for years he has used this money to support the trade fair. The major issue for us is the issue of job creation and we cannot do it without looking at ways to stimulate our own economy.

“We would be spending close to N5 trillion in the 2016 budget in this regard and if that alone is going towards the local industries it will make a great deal.

“We must see that we amend the law and oversight properly to see that we make a difference in this country.”

Saraki called relevant committees to expedite action on amendment of the Procurement Act before passage of the 2016 budget to give first option to two locally produced products.