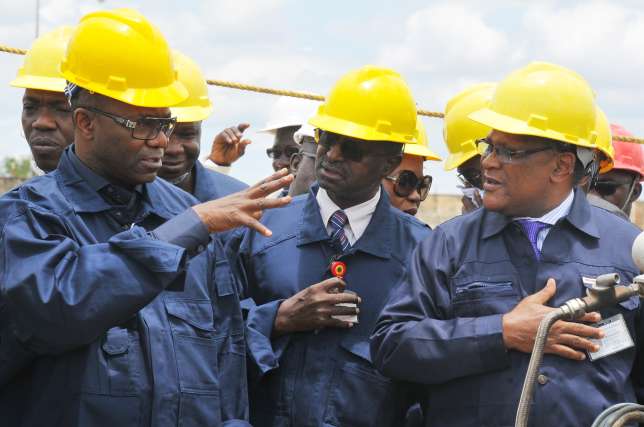 Unless militants blowing up oil installations and facilities in the oil-rich Niger Delta are prevailed upon to stop their violent campaign, operations of the Nigerian National Petroleum Corporation, NNPC would shut down and cripple the nation’s economy. This warning came from erstwhile Group Managing Directors (GMDs) of the NNPC at the end of their one day meeting recently in Abuja, the nation’s capital.

The meeting which was attended by incumbent GMD, Maikanti Kacalla Baru and his predecessor and Minister of State (Petroleum Resources), Emmanuel Kachikwu Ibe and others before them was conveyed to proffer harmonious solution to the incessant bombing of oil facilities by militants since the assumption of office by President Muhammadu Buhari more than a year ago.

According to the former GMDs, there is the urgent need for security agencies and government to come up with a lasting solution to the menace of oil theft, bunkering and violence, noting that the shortfall in the nation’s crude oil export is difficult to accept in an economy battling recession that has thus far shown little sign of abating.  They called on government to device diplomacy by bringing on board the host communities with the active involvement of the traditional institutions, if only to prevail on the boys to lay down their arms.

While commending the corporation for ensuring steady supply of the Premium Motor Spirit (PMS) in the last couple of months, they called for implementable measures to make the product available across the country for a sustained period. Although, Nigerians have fairly adjusted to the new price regime of N145 per litre of PMS, the ex-GMDs called for a further review, noting that the price cap is not in sync with the liberalization policy argument of government which is premised on competition and expected fall in price.

The refineries, they argued, would not yield expected mileage until they are restructured to meet the needs of an ever expanding population .They recommended the restructuring of the existing four refineries to operate as Incorporated Joint Ventures in the manner of the Nigerian Liquefied Natural Gas ( NLNG) framework where partners have satisfactory technical abilities and financial buoyancy.

Equally gratifying to the former eggheads of the NNPC was President Muhammadu Buhari’s relentless effort in the search for oil deposits away from the shores of the Niger Delta. It would be recalled that in the last few months, government intensified exploration activities in the Lake Chad Basin and the Benue Trough, with the latter said to be holding a huge prospect.

However, the former GMDs expressed their dismay over the huge debt profile of the NNPC even as they called for the formulation and implementation of cost saving strategies to stay afloat and remain productive in this time of financial squeeze. They therefore called on Baru to immediately carry out a comprehensive audit to determine the financial status of the corporation, if only to assist in the making of a decision on the most appropriate capitalization model to adopt.

This medium learnt that the increasing fixation of some media houses and civil society organizations in the last few months partly informed the decision of the ex-GMDs to come together for deliberations on the way forward for a corporation they superintended over at different times.

It is alleged in some quarters that underhand dealings by top officials of the NNPC in recent times is largely to blame for the inability of the company to live to its true potentials.

A highly-placed source who spoke to Orient Energy Review in confidence said the meeting was not much about Baru given the fact that he assumed office barely few months ago. In his words, the ex-GMDs came around to also protect their integrity, knowing that when the books are opened, they would be called upon for questioning.

“They will tell you the purpose of their meeting was to lend support to the incumbent GMD in his search for answers to the incessant violence by the Niger Delta Avengers. That may be partly true but beyond that, we know more than what was fed to the public,” said the source, who described the development as “a smart move,” capable of diverting the attention of critics in the interim.

Asked to throw more light on his assertion, he continued: “It is common knowledge that the NNPC is one of the most poorly managed public enterprises since the return to democracy in 1999. Do not forget that the current Emir of Kano, Sanusi Lamido Sanusi at a point berated the NNPC for failing to remit huge sums of money into the Federation Account, amongst other shady deals. Now, the rot is much more. Thus, when they assembled, those in the know were aware why they were in town.”

But regardless of the underlying motive of their Abuja gathering, stakeholders in the oil and gas sector say their advice is both apt and timely and if implemented could make the NNPC and the indeed the economy more productive.