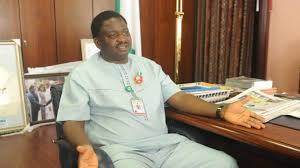 What a week it has been for our own dear native land! Just at the beginning of the month, as the country turned 60 as an independent entity, President Muhammadu Buhari had charged us to “begin sincere process of national healing, eliminate old and outworn perceptions that are always put to test in the lie they are.”

What began about a fortnight ago as “genuine concerns and agitations” by Nigerian youths against the excesses of the Special Anti-robbery Squad of the Nigeria Police has suddenly transmogrified into expressions of hate against the land, leading to murder, mayhem and arson. My sympathy and condolence to family and loved ones of the dead, irrespective of how they came to their unfortunate ends.

How can what began as peaceful protests suddenly turn to incipient anarchy as seen in killings, torching of public buildings and properties, storming of the Bastille and wanton release of hardened criminals, and many others. Hatred. Nigeria is one country passionately hated by some of those who live in it, and it had always been so.

Some people call it “the mistake of 1914” in which what used to be the Northern and Southern Protectorates were forcefully cobbled together by the colonial masters, leading to the emergence of Nigeria. Since then, it has been one uneasy relationship among the people that make up the Union. Suspicion of domination, ethnic rivalry, fear of being given the shorter end of the stick, gaining unfair advantage, and the like, have characterised the relationship. And the overriding sentiment is hatred, fuelled and justified by many factors and tendencies.

If Nigeria dies, whether now or in the future, hatred killed her. How can a people go about bearing giant-sized grudges against their country, its leadership, against one another, and expect that country to live in peace and prosperity? It won’t happen. “When we don’t know who to hate, we hate ourselves,” observed a writer.

The #EndSARS campaign began as an agitation against police brutality, in which there was unanimity of purpose. And suddenly, it became a vehicle of hate. Against leadership, against national cohesion, an opportunity to settle political scores, and equally prepare for power grab in 2023. Hatred came into the mix.

The agitation by youths against injustice and oppression suddenly took on a variegated nature. Separatists came under the umbrella, and began to advance their cause, working for the dismemberment of the country. Those beaten black and blue in 2015 and 2019 elections also crept in, and asked for pound of flesh, while also plotting for a return to power in 2023.

The venom, which peaceful protests eventually became, can only be summed up by one word. Hatred. How can you begin to club people to death, in different parts of the country? How can you set fire to national assets and institutions, storm prisons and release prisoners into society, all in the name of peaceful protests? No, peace had fled through the window, and hatred was fully in control.

There are many factors and agencies of hatred in Nigeria, and until we learn to purge ourselves, the country may never move beyond where it has been pirouetting and gyrating for six decades. Like the macabre dance, it has been one step forward and two steps backwards.

Hatred is evinced from many quarters for Nigeria, and for its government and people at any given time. It comes from churches, mosques, professional activists and agitators, interest groups, some elements in the media, so-called analysts who never see anything good, and so on and so forth.

When things boil over in graphic demonstration of hatred, it is a culmination of negative sentiments and tendencies. They come in persistent negative postings on social media, which generate and stimulate hate. From hateful messages from the pulpit, as if that was the message of love Jesus Christ handed over to his followers. From unduly critical messages during jumat services. From radio and television programmes, in which bile is spewed. From talkshows which become a harangue of government, newspaper articles and columns tailored to instigate and generate dissent, and the like.

Eventually, all cumulate in hatred, which finds expression in genuine causes like the #EndSARS campaign. When things boil over, they leave sorrow, tears and blood in their wake, as we have seen. And who suffers? The whole country. Who bleeds? Nigeria. And one day, if Nigeria ever dies, despite years of attempting to build and nurture it, hatred would have killed it. A knife in the guts. A bullet to the head. An arrow to the heart of Nigeria, is hatred. Animus against anything that does not directly lead to personal aggrandisement, that does not promote selfish narrow interests.

Many times, President Buhari had said it was the right of protesters to indicate their displeasure, as long as it was done within the limits of decency and the law. Disbandment of SARS, he said was only the first step in what would be comprehensive police reforms.

Talking of reform of the police, I know the mind of the President on that issue. Sometime in the early days of the first term of the administration, I had dropped into the house one night, as I do once in a while. And it was a few days to the exit of the then Inspector General of Police, Solomon Arase, who was going into retirement.

The President told me how much he had been impressed with Arase, and how he regretted that the man spent just about a year with him. He then told me of the police of his dreams, and how he wished he got someone who would translate the dream into reality. So, when the President said in a speech to the protesters last week that comprehensive police reform was coming, I knew what he had in mind. If only we would be patient and let him implement the five points demand of the protesters, which he had accepted. But alas, the protest took another hue and nature, different from the original concept and focus. Hatred crept in, nurtured by all sorts of tendencies.

“I have decided to stick with love. Hate is too great a burden to bear,” said Martin Luther King, Jr. But not for some Nigerians who have decided to hate their own country. They perpetually stoke the embers of malice, discord and discontent. They bear a heavy burden, which they carry around everywhere, being grumpy, caustic and perpetually driven by ill will.

Hatred is a poor prop for anyone to lean on. But to those malicious souls, the more malice they generate for their country, the better they feel. They may carry fancy religious titles, or parade as activists, analysts or newspaper columnists, but what they are is really simple. Hate mongers, and one day, they may ensure that Nigeria dies. Not of old age or other natural causes, but of hatred.

. Adesina is Special Adviser to President Buhari on Media and Publicity.