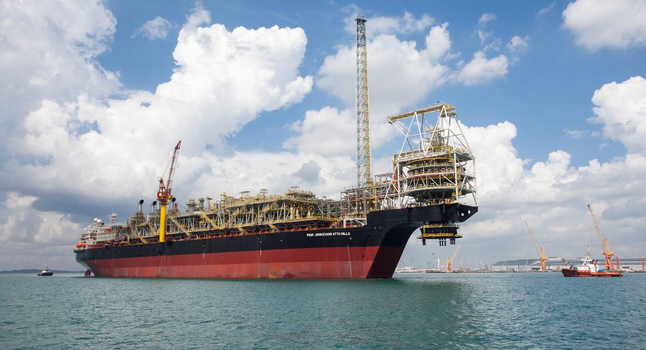 The vessel, which was constructed in Singapore and named by the First Lady, Mrs Lordina Mahama, in September 2015, is expected to start producing oil from the TEN fields by July/August 2016.

A statement from Tullow Oil said the FPSO began its voyage from Singapore to Ghana on 23rd January 2016 with almost zero “carry over”, meaning only 2,000 man hours of work remained to be completed during the voyage.

This was a very significant industry achievement. The FPSO will move directly to the installation phase when it arrives on station, the statement said. This will be followed by the hook-up of subsea facilities via flowlines, risers and control umbilicals, much of which had already been pre-installed.

In addition, six wells have already been completed, and the completions of the remaining wells were on schedule. The integrated facilities would undergo final commissioning and testing during the second quarter of this year before first oil.

Tullow Ghana Ltd Managing Director, Charles Darku, commented: “We are extremely pleased and proud that Ghana’s second FPSO has arrived safely here on our shores. It is a source of pride to note that many of the component parts of both the FPSO and the subsea infrastructure were built and supplied by Ghanaian companies.

“Tullow and its partners remain at the forefront of unlocking Ghana’s oil resources for the mutual benefit of the nation and shared prosperity. We can look forward to first oil from the TEN fields by July/August this year”.

The FPSO Professor John Evans Atta Mills was constructed by MODEC and will be operated by MODEC Ghana Ltd on behalf of the TEN Partners.