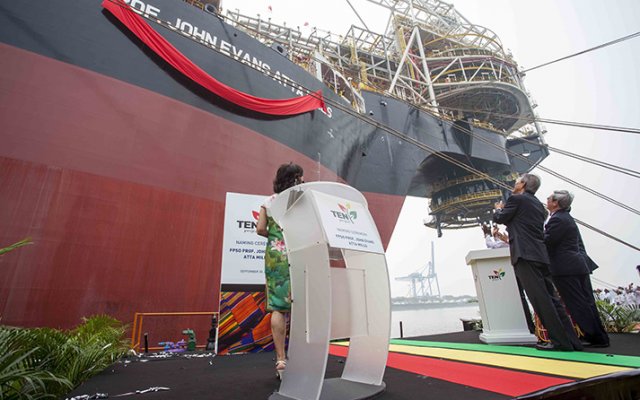 Tullow Oil Plc has said work on the Tweneboa-Enyenra-Ntomme (TEN) project is almost over, with the “next important event being the sailaway” of TEN’s Floating Production Storage and Offloading (FPSO) from Singapore to Ghana.

The vessel is expected to depart in late January 2016 and arrive in Ghana in early March when the vessel will begin to be connected to the risers and subsea infrastructure.

A gradual ramp up in production towards plateau is anticipated during the second half of 2016 as the facilities go through the final commissioning stage and wells are tied into the FPSO.

Following the success of the Jubilee field discovery, the partners in Ghana embarked upon an exploration programme to find the next major deepwater field.

In March 2009, the Eirik Raude rig successfully drilled the Tweneboa-1 wildcat well in the Deepwater Tano licence, around 20 km west of Tullow’s Jubilee field and some 45 km offshore from the Ghana mainland. This initial discovery was followed up by a series of further successful appraisal and exploration wells which resulted in the discovery of the Tweneboa-Enyenra-Ntomme (TEN) field.

In May 2013, Ghana’s Energy Minister at the time approved the Plan of Development for the field and Tullow commenced with its second major operated deep water development project in Ghana.

Similar to Jubilee, the development includes the use of an FPSO, which has a facility production capacity of 80,000 bopd, which will be tied in to subsea infrastructure across the field.

LEKOIL To Add 20,000bopd To National Oil Output With…

FPSO Prof John Evans Atta Mills will produce and store oil from the TEN oilfields, which lie around 60 kilometres from the coast of the Western Region.

The vessel is nearing the end of its construction at Sembcorp Marine Shipyard in Singapore and Tullow says it will set sail to Ghana by the end of this month.

Upon arrival in March, FPSO Mills will be hooked-up to the subsea production equipment, which is being installed on the seabed in the TEN fields. Tullow said in its latest update that the TEN Project continues to make excellent progress, and is over 80% complete, and remains within budget and on schedule for first oil between July and August 2016.

The TEN Project is Tullow’s second major operated deepwater development in Ghana, which will produce up to 80,000 barrels of oil per day.