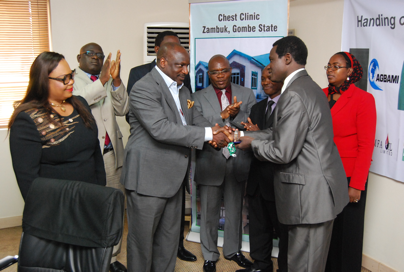 Checking The Menace Of Tuberculosis In Nigeria: The Agbami Example

Tuberculosis, popularly known by its abbreviation, TB, has existed for millennia and remains a major global health problem. It causes ill-health in millions of people each year and in 2015 was one of the top 10 causes of death from an infectious disease worldwide, ranking above HIV/AIDS. In Nigeria, TB still creates a major health problem. The World Health Organization (WHO) in its 2016 “Global Tuberculosis Report” ranked Nigeria first in Africa and fourth in the world behind India, Indonesia and China. Nigeria is one of the six countries that accounted for 60 per cent of the total global TB burden last year, according to WHO’s report.

The Minister of Health, Professor Isaac Adewole, few days ago, lamented the high burden TB rate in Nigeria which is exacerbated by undiagnosed cases. According to Professor Adewole about 80 percent of the country’s TB cases are undiagnosed. That means, only one out of six TB cases in the country is diagnosed. In other words, there are five TB cases out of six cases in the country that are undiagnosed. This no doubt, presents a threat to our own health. The problem of TB in Nigeria is also compounded by the emergence of multi-drug resistance cases. Roughly, TB is said to claim over 1.5 million lives annually in the country in spite of the fact that it is treatable and curable.

It is therefore imperative for every individual and organization to make concerted efforts to fight this dreaded disease that is killing many people, negatively affecting our lives and threatening our quest for sustainable social and economic development. For sure, no Nigerian should die of TB.

However, it is gratifying to see that individuals and organizations such as Star Deep Water Petroleum Limited, (a Chevron Company) and the Agbami parties– Famfa Oil Limited, the NNPC, Petrobras and Statoil- – have keyed-into the Federal Government’s TB program by contributing their quota to the fight against the disease.

Recently, the Agbami parties donated modern laboratory equipment to the University College Hospital (UCH), Ibadan, Oyo State and also handed over to the Federal Ministry of Health, the production of national standard operating procedures (SOP) for TB laboratory diagnosis in Nigeria and national guidelines on biosafety for TB laboratories, sponsored by the Agbami parties. The modern laboratory equipment donated to UCH is expected, in no small measure, to transform the treatment of tuberculosis in the country. As Professor Temitope Alonge, UCH’s Chief Medical Director (CMD), noted, the story of treatment of tuberculosis in the country is anticipated not to be the same again following the donation of the laboratory equipment, an 80 KVA generator and 20KVA stabilizer with two inverters to ensure steady power supply to the laboratory.

It is also important to note that the footprints of the Agbami parties in health and TB specifically, are not limited to Oyo State or the Federal Ministry of Health. In partnership with National Tuberculosis and Leprosy Control Program (NTBLCP), screening exercises were conducted in Bayelsa State. From the 14,352 presumptive Tuberculosis cases screened, 2,126 cases were detected. Also, contact tracing among 701 smear positive cases yielded 321 extra smear positive contacts as well as 92 Multi drug-resistance tuberculosis (MDRTB) patients were identified and 53 were treated.

In 2016, the Agbami parties, partnering with implementing Non-Governmental Organizations, launched a TB Awareness Campaign to sensitize people in Kano, Lagos, Kaduna and Rivers States, on the dangers of TB, its prevention, management and treatment.

From 2008, the Agbami parties have built, equipped and donated 25 chest clinics to institutions and hospital across the country as part of their efforts to support the efforts to control, treat and eradicate TB from the country.

It is noteworthy that the Agbami parties are supporting the Federal Government’s quest to provide adequate and affordable quality healthcare to Nigerians, and to ensure the development of the country. A healthy population, no doubt, is important for the socio –economic development of a country. In the words of the Minister of Health, Professor Adewole “TB remains an epidemic. All of us must work together to really put the tag on it because TB is a preventable and curable disease.”