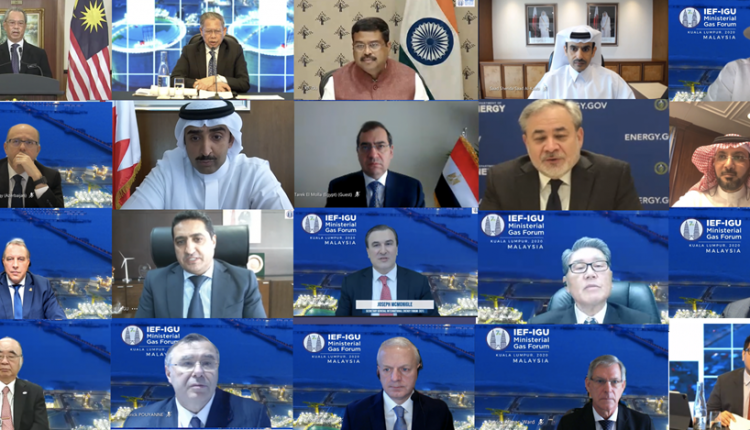 Natural gas embodies all the attributes required to achieve the multidimensional challenges of environmental protection, energy access, and affordability in a world stepping onto the road of recovery, the Gas Exporting Countries Forum Secretary General Yury Sentyurin said on Thursday at the 7th IEF-IGU Ministerial Gas Forum, hosted virtually by the Government of Malaysia.

“As the world reaches the end of the pandemic tunnel, it will need an energy partner that can help prevent environmental degradation, ensure a stable and uninterrupted supply of energy, and bring affordable and reliable energy for all. Natural gas is that partner,” said Sentyurin.

“The GECF Member Countries are amongst the lowest cost producers globally and are able to weather the current storm – or any other. We understand our duty to the world and are committed to strengthen global energy security as reliable suppliers of this important energy source,” he said while adding that natural gas will become the leading source in the global energy mix by mid-century, increasing its share from currently 23% to 28%.

The high-level gathering embraced the exponential growth of natural gas since the first edition in 2008 and highlighted the role of natural gas as it pertains to strengthening energy security and facilitating an orderly energy transition in an increasingly carbon constrained world.

The energy ministers at the day-long conference identified Asia as the main demand node for natural gas on the back of rising populations, environmental pledges, and phasing out of coal. Currently, coal meets 47% of Asia’s energy consumption, while natural gas provides just 12% of primary energy consumption in the world’s largest region.

According to the GECF Global Gas Model, ASEAN and East Asia countries’ energy needs will account for around 60% of global energy demand increase between today and 2050. This growth will account for 42% of the global gas increments within the outlook period, driven by China, India, emerging markets such as Bangladesh, Pakistan, and a few others in South East Asian countries.

“Increasing Asia’s share of gas energy consumption to 20% would add the equivalent of more than 400 million tonnes of liquified natural gas (LNG) to annual gas demand, almost doubling the size of the LNG market,” said HE Tan Sri Muhyiddin Yassin, Prime Minister of Malaysia, in his inaugural address.

Malaysia – a member of the GECF coalition – is the fifth largest exporter of LNG in the world, delivering over 11,000 cargoes since 1983. But now the country is reimaging the role of natural gas, according to HE Dato’ Sri Mustapa bin Mohamed, the Minister in the Prime Minister’s Department (Economy).

“As a country that is both an exporter and an importer of natural gas, Malaysia is playing an active role in global gas advocacy and participating in charting its future direction. It is for this reason that Malaysia is part of the GECF… to collaborate with energy associations and other energy producers, engage in meaningful dialogue and address the critical issues of energy poverty, whilst taking into serious consideration global environmental concerns,” said HE bin Mohamed.

Qatar’s Minister of State for Energy Affairs and President and CEO of Qatar Petroleum, HE SaadSherida Al-Kaabi struck a positive chord by maintaining that the gas industry, particularly LNG, has several milestones yet to achieve.

“I believe the economic and environmental realities of the post-COVID-19 era will help to increase the competitiveness of LNG and I have no doubt that the best for the LNG industry is yet to come,” said HE Al-Kaabi.

In another promising news, India’s Minister of Petroleum & Natural Gas and Steel, HE Shri Dharmendra Pradhan said that the demand for natural gas and other energies in the world’s second populous nation has already returned to pre-COVID-19 levels.

“I’m happy to mention that the energy demand in India, particularly of the petroleum products and natural gas, has returned to pre-Covid-19 level. As the third largest global energy consumer, I am confident that India will continue to remain a key global energy demand centre, particularly for natural gas,” said HE Pradhan, while airing the views of a gas consuming country.

Meanwhile, ministers from Nigeria, Egypt, Azerbaijan and Iraq – all members of the GECF – further discussed the opportunities that exist in growing gas markets and various policy pathways to achieve net-zero emissions in two sessions of the Meeting.

Nigerian Minister of State for Petroleum Resources HE Timipre Sylva said: “The UN describes energy as central to nearly every major challenge and opportunity the world faces today. However, around a billion people continue to live without electricity. A further billion struggle for a reliable supply of electricity. A revolution in the global energy system is needed.”

Advancing Egypt’s view, where natural gas accounted for more than 60% of total domestic consumption in 2019-2020, Minister of Petroleum and Mineral Resources, HE Eng Tarek El Mollasaid: “Gas started to have an increasingly tangible impact on human civilisation in the second half of the twentieth century. Today, it has come to the forefront, affecting the implementation of practically all sustainable development goals.”

Referring to the role of gas as a connector and stimulant of economies, Azerbaijan’s Minister of Energy, ParvizShahbazov, said: “Southern Gas Corridor will continue playing a crucial role in the formation of the energy map of the 21st century.”

Announcing that major oil exporter Iraq will increasingly switch to natural gas to generate power for its citizens, Minister of Oil HE IhsaanAbdul Jabbar said: “Our target is to utilise more and more gas, from associated gas fields and from free fields, to use it as a fuel for power generation for all of Iraq. This is our priority.”

Other ministers at the 7th IEF-IGU Ministerial Gas Forum joined from Bangladesh and Bahrain, the Secretary of Energy from the United States of America, and ministers’ representatives from Brunei Darussalam, Canada, Morocco, Turkey and Kingdom of Saudi Arabia. Amongst the private sector were Total, Tellurian, Royal Dutch Shell, Dana Gas, Eni, to name a few.

IEF Secretary General HE Joseph McMonigle said: “I’m confident that with your presence and engagement this 7th IEF-IGU Meeting has delivered meaningful outcomes and that all stakeholders will seize the opportunity that natural gas offers for recovery and shared prosperity.”

Echoing the theme of the Ministerial Forum, which was entitled, “Towards Recovery and Shared Prosperity: Natural Gas Opportunities for a Sustainable World”, Secretary General Yury Sentyurin said: “The GECF wishes to underline the fundamental role natural gas plays not only as the fuel of choice for economic recovery, but also as a long-term partner to bring about prosperity for all.”