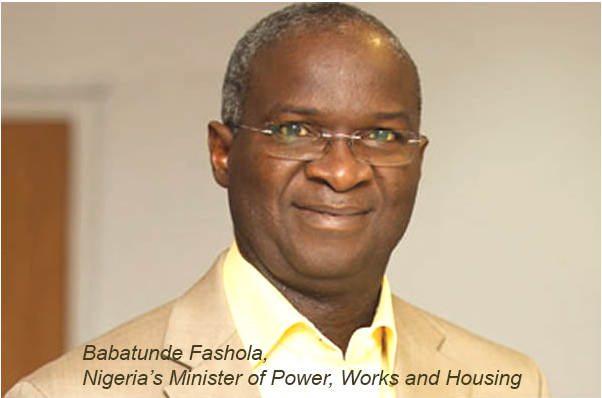 Politics, Economy to Blame for Our Power Woes – Fashola

The Minister of Power, Works and Housing, Mr. Babatunde Fashola (SAN) has stated that the failure of the Nigerian power sector to deliver optimal service to the Nigerian people has more to do with the lack of sufficient political will to the right thing than the nation’s technical know-how. Fashola stated this at the 11th Nigerian Association for Energy Economics& International Association for Energy Economics Annual Conference in Abuja recently. Represented by the Permanent Secretary in the Ministry, Louis Edozien, the Minister noted that the “economics of energy,” which the nation was yet to master have left gaps in the quest to make the most of the sector despite the efforts of past administrations. He said, “The reason why our industry is not delivering has very little to do with technology; it has to do more with the economics of energy, the politics of energy, the legality of an industry where multiple private and public companies are interacting through contracts.”
The minister also argued that while advanced economies were already moving toward a no-oil future; Nigeria is said has not displayed sufficient readiness required to build an economy that is not reliant on the black crude. In his words, clean energy has, in the past couple of years, been occupying the epicentre of world thinking, noting that unless the nation looks into ways of transforming its vast mineral and human endowment; not much would be gain in the pursuit of the current energy paradigm.
Also, speaking at the event, Executive Secretary, Petroleum Technology Development Fund, Aliyu Gusau, and a former Group Managing Director, Nigerian National Petroleum Corporation, Funsho Kupolokun noted that the oil and gas sector was still failing the transparency test, more than a decade and a half after the return to democracy in 1999. According to Kupolokun, “Everybody is talking about transparency in the petroleum industry. Everybody is talking about it; what is happening is that we are still not doing it. We keep talking about it. “In 1999 when I came back into the government system, it was a key issue; a number of bodies were set up by the government; yet today, we are still talking about it.”
The former NNPC GMD further stressed that the difficulties being faced in the industry would continue if the downstream sector is not deregulated to unlock its incredible potentials. Deregulating the downstream sector in the words of the Petroleum Engineer would open up the oil and gas industry for effective service delivery. His words: “We have been talking about deregulation since 1993. It went up and down with fuel price moving up and down. If we had continued to move gradually that way, we would have finished the liberalization of the downstream sector. But we reversed ourselves and today, we are in a scenario where we are still talking about deregulation.” He bemoaned the slow pace of the exercise (deregulation), and called for quick action to make it happen once and for all.
“How many years, some 25 years we have been talking of deregulating the downstream sector, yet, it is still undone. I just hope we do it and do it rapidly because unless and until it is done, we will continue to have the problems that we have in the downstream petroleum sector.” On his part, Gusau stressed that more focus should be placed on the midstream and downstream sector of the industry, saying, “I believe that oil is still central. The oil industry in Nigeria is the only sector that has the capacity to provide the foundation for the post-oil economy journey. But it cannot be done with the current business model that is focused essentially on the upstream. “The business of taking oil from the ground and marketing it across the globe has to stop. The only way that the oil and gas industry can provide the foundation for the journey of a post-oil economy is to move from its focus on the upstream, down to the midstream and downstream where the value is created,” he said.
Gusau added, “This is the area where value, wealth and jobs will be created. This is the area that will create the fertilizer, the electricity and the petrochemicals that we require. This should be, going forward, the norm in the Nigerian oil and gas industry. But what is the strategy to achieve this? “Unfortunately, I have gone through all the four bills of the petroleum industry waiting to become law. I have seen the fiscal and regulatory provisions of the midstream and the downstream, but I have not seen anything in all the four bills that incentivize value generation. This is the challenge I must put forward, because this is the key in our journey to a post-oil economy in Nigeria.” The deregulation of the downstream sector is one of the cardinal focus of the newly passed Petroleum Industry and Governance Bill (PIGB) which is now awaiting Presidential assent, with energy players unanimous that when it eventually becomes a law, the nation and her citizens will be the better for it.