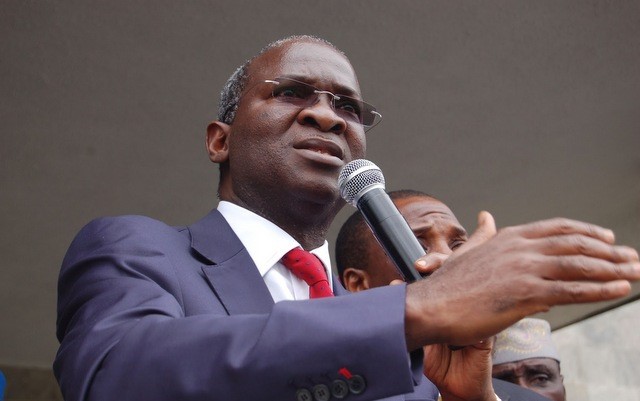 The Minister of Power, Works and Housing, Mr. Babatunde Fashola, SAN, has reiterated the resolve of the ministry to hold power sector operators accountable to service commitments through its regulatory agencies , even as he enumerated the benefits of the Multi-Year Tariff Order to electricity consumers.

Fashola, who spoke at the Mabushi Headquarters of the ministry, while hosting the Director General of the Consumer Protection Council (CPC), Mrs. Dupe Atoki, also promised to raise standards in the housing sector, saying the ministry would ensure that when a house is built either by government or private investors “it stays built”.

The minister said although the role of his ministry is not to take sides, the new tariff regime has been made to protect the consumer as the ministry ensures that Discos and Gencos perform their responsibilities well and that they are held to their service levels adding that the ministry also stands between them and consumers to ensure that they do not profiteer against consumers.

“What the last tariff also did was to say how do we stand to address the metering gap between the consumers and the DisCos. It also tried to address the issue of estimated billing so that if you dispute your last bill because you don’t have a meter you cannot refuse to pay, pay what you believe you have consumed and you cannot be disconnected”, the Minister said.

He noted, however, that consumers seem not to fully understand the benefits of the tariff hence the present controversy.

Elucidating more on the reason for the new tariff, the Minister, who maintained that it is more friendly for the consumers ultimately added that it also sought to balance the interest of the DisCos because, according to him, “You cannot sell below your production price and if the price of gas has gone up, for instance, you must factor that into your price”.

Still on the benefits of the new tariff, the Minister who noted that 5000MW was not enough for over 100 million people added, “We cannot improve on quality without having more power and one of the things that this tariff seeks to address is that private organizations can provide power and this is to ensure that if anyone who wants to pay for premium power can leave the public power space for people who want to stay there”.

“The law provides for it so you can leave the pay-as-you-go for the premium power. These are some of the consumer beneficial deliveries that are involved and I think I can’t begrudge people this and there is a lot of emotions”, he said.

Also identifying the Credited Advance Payment for Metering Initiative (CAPMI) as one of the challenges that should be resolved soon, the Minister declared, “you cannot take peoples’ money without providing the service for which they have paid. I was uncomfortable with that”.

He said the Ministry has ordered that that scheme is wound down so that people could get what they have paid for adding that it is the responsibility of the Discos’ to provide meters for their consumers and so wind down what they have collected.

“We must bring mutual trust in the provision of power and those are some of the emerging issues again and if people have paid for something they deserve to have it and if you can’t do it wind down the scheme. Let’s hold you now fully responsible, you have a market tariff you go and meter. All of these things are happening at our monthly meetings and we are also holding the Discos now to their committed timelines for metering and we are also asking them to file returns”, he said.

In the words of the Minister: “We ask them ‘who have you metered? We want to see the details if you tell us you have metered XYZ’. This will be an ongoing exercise until we finish, we also need to be fair because if since 1960 that we started public power and we have not metered everybody when our population was not as much as this , do we honestly think this can happen in five months?

“But ultimately this will happen because there is a business end to it and for those who are bringing in the meters they also need to bring in high-quality meters because they have a duty to protect both the consumers and the Discos”, Fashola said.

Electricity distribution companies have said the deadline given to them by the Federal Government to meter one million electricity consumers annually is not realistic.

According to the Discos, the cap on their capital expenditure is a major challenge to meeting the deadline.

The chief executive officers of the 11 Discos stated this during an interactive session with the Acting Director-General, Bureau of Public Enterprises, Dr. Vincent Akpotaire, at the bureau’s office in Abuja.

The bureau, in a statement issued on Wednesday by its Head, Public Communications, Mr. Alex Okoh, stated that the meeting also had heads of power generation companies in attendance.

Speaking on behalf of the successor power companies, the Managing Director, Ibadan Electricity Distribution Company, Mr. John Donnachie, said the Discos and Gencos had benefited from efforts of the government in the sector through the National Integrated Power Project, the Niger Delta Power Holding Company, the Nigerian Bulk Electricity Trading Plc and the Central Bank of Nigeria’s N213bn intervention fund.

Donnachie, however, called for additional intervention through the bureau to secure more investment from the Federal Government by financing the 40 per cent equity held in trust by the BPE for the government.

On the implementation of a cost-reflective tariff, he said it was a step in the right direction but that the deadline by the Federal Government to the Discos to meter one million customers within a year was not realistic.

He explained that the cap on the Discos’ capital expenditure was a hindrance to meeting the deadline.

The IBEDC boss stated that metering was a capital-intensive venture and a key component in implementing the new tariff.

In his address, the BPE DG said that continuous interactions as well as the commitment of the power operators and the political will of the Federal Government were critical to resolving the challenges in the sector.

Akpotaire called for enhanced synergy between the successor companies of the defunct Power Holding Company of Nigeria and the bureau to boost efforts towards actualising the full objectives of the power sector privatisation.

While acknowledging that there were fundamental challenges within the sector, he stated that they were not insurmountable if given time, inter-agencies collaboration and adequate investment.