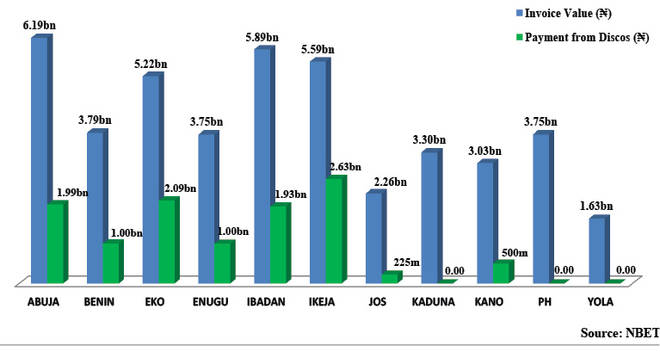 Eight of the 11 electricity Distribution Companies (DisCos) have remitted N11.38 billion only from the invoices of N44.44bn they received from the Generation Companies (GenCos) for the electricity they purchased in February 2018, data from the Nigerian Bulk Electricity Trading Plc (NBET) has revealed.
The update of monthly remittances for the 3,225 megawatts hour per hour (MWh/h) energy consumed by the DisCos posted on the website of NBET showed that the payment represented a paltry 25.62 per cent payment of the invoices.

The record showed that three other DisCos remitted zero amount in the month from the N8.68bn invoice prepared by the GenCos for them.
The three DisCos without any remittance, according to the data, are Kaduna DisCo with N3.30bn invoice; Port Harcourt DisCo, N3.75bn; and Yola DisCo, N1.63bn.
Leading the DisCos on the remittance list was Ikeja DisCo by 47 per cent after it remitted N2.63bn from its N5.59bn invoice; followed by Eko DisCo at 40 per cent after the firm remitted N2.09bn from N5.22bn invoice.
Ibadan DisCo came third, remitting N1.93bn (32.83 per cent) from its N5.89bn invoice. Although Abuja DisCo had the highest invoice of N6.19bn, it was fourth on the list having remitted 32.19 per cent equivalent to N1.99bn.
The sixth firm on the remittance level was Enugu DisCo on 26.63 per cent. The firm remitted N1bn out of an invoice of N3.75bn. At the sixth place was Benin DisCo which remitted N1bn of its N3.79bn invoice, representing 26.51 per cent, the record showed.
Jos DisCo remitted the least of N225 million from N2.26bn invoice it got, representing 9.92 per cent payment level; Kano DisCo was at 16.49 per cent as it remitted N500m from its N3.03bn invoice.
Late payment of N9.36bn was recorded for January 2018 invoices summing the February payment to N20.75bn, the electricity market intermediary agency noted

THE CASE FOR NUCLEAR POWER PLANTS IN NIGERIA

50,000 Shops to Benefit from Electrification Project in Aba – Fashola