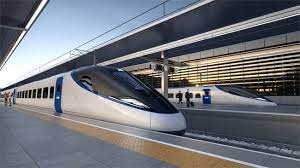 As part of efforts to reduce the rising greenhouse gas emissions, the British government has announced that its new high-speed HS2 trains would run zero-carbon electricity. This means that the trains would only use electricity generated from sources such as wind, nuclear and solar, rather than fossil fuels.

The minister in charge of British high-speed railway, Andrew Stephenson, who made the announcement said that there are other series of new measures to reduce the project’s carbon footprint, including eliminating diesel from at least one HS2 construction site in 2022 and from all sites by 2029.

The minister also noted that there is a new target for carbon emissions from the steel and concrete used to build the railway to be halved, compared with 2021 levels by 2030.

“We know that the climate crisis demands urgent action, and these commitments from HS2 are vital steps towards achieving cleaner UK travel.

“HS2 is a once-in-a-lifetime investment and we want to ensure the country’s biggest infrastructure project supporting thousands of jobs and businesses is underpinned by the government’s ambitions for a greener transport and construction future,” Stephenson said.

The first phase of HS2 from London to Birmingham is scheduled to open between 2029-2033 as Britain has also proposed to reduce greenhouse gas emissions to net-zero by 2050.

According to the chief executive officer of HS2 Limited, Mark Thurston, “HS2 Ltd. is completely committed to reducing our carbon emissions as we design, build and operate the new railway.

“The new targets announced today demonstrate the significant role HS2 will play in addressing climate challenges by providing a low-carbon, long-distance transport solution and leading the construction sector to drive down carbon emissions.”

“We’ve ensured that tackling climate change is an essential feature of all areas of our work in design, in early works and throughout major construction, allowing the project to build towards net-zero from 2035.

Also speaking on the project, the director of Climate Action for The Wildlife Trusts, Kathryn Brown, said that “It is good to hear positive ambitions for HS2 because, so far, the construction has caused only damage and destruction of nature.”

Brown said that “promising low-carbon travel is vital, but not if that comes at the expense of the natural world. We can’t build our way out of the climate crisis, and the government has made it clear that restoring nature and natural processes is needed at an unprecedented scale. When it comes to the nature emergency, so far, HS2 has only made things worse,” the director added.

Nigeria Remains in Darkness Despite NERC’s Approval for Over 2,000MW Power Projects in One Year