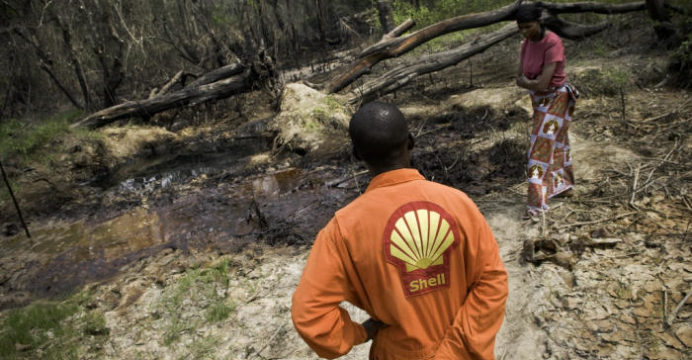 With a daily loss of about 10,000 barrels of oil from its pipelines to crude oil theft, The Shell Petroleum Development Company of Nigeria Limited (SPDC) has cried out for help from government, communities and other stakeholders to stem the incessant attack on oil assets in the Niger Delta.

This is as the Nigeria National Petroleum Corporation had in June 2019 monthly report revealed a 77% rise in oil pipeline vandalism with 106 pipeline breaches recorded in June, up from 60 in May.

Speaking in Port Harcourt on Monday at a media workshop on Pipelines Right of Way Encroachment and Vandalism held in Port Harcourt, Rivers State, SPDC’s General Manager External Relations, Igo Weli described crude oil theft and artisanal refining of stolen crude as criminal acts said, “that are not only against the law but are also capable of mortgaging the future of the community.”

Continuing, he said, “These are critical national assets with 55 per cent government interest and they produce the crude oil that accounts for over 90% of Nigeria’s foreign exchange and the bulk of government revenue. Hurting these assets means hurting the nation’s revenue, the economy of the states, the health of the people and the environment.

“Crude oil theft on the pipeline network resulted in a loss of around 11,000 barrels of oil a day in 2018, which is more than the approximate 9,000 bbl/d in 2017.” Adding that since 2012, SPDC had removed more than 1,160 illegal theft points on its joint venture pipelines in the Niger Delta.

Speaking further, Weli said SPDC was concerned about the lives and safety of those involved in pipeline vandalism and crude theft just as the company was concerned about the environment. “As a responsible organisation, we put safety first and have constantly made this appeal to those involved in crude theft in the Niger Delta to stop destroying their land and heritage from the spill and pollution arising from their activities.”

Also speaking SPDC’s General Manager, Safety and Environment, Chidube Nnene-Anochie, noted that illegal refining and third-party interference with pipelines were the main sources of pollution in the Niger Delta. According to Nnene-Anochie, in 2018 alone, “third party
interference caused close to 90% of the number of spills of more than 100 kilograms from SPDC JV pipelines.”

Represented by SPDC’s Compliance Monitoring Lead, Temitope Ajibade, the GM, Safety and Environment said no spill was acceptable to the company. “A key priority for Shell companies in Nigeria remains to achieve the goal of no spills from our operations. No spill is acceptable, and we work hard to prevent them. However, SPDC cleans and remediates areas impacted by spills from its facilities irrespective of the cause.

On the measures taken by the company to stem crude theft, she explained SPDC had enhanced its community-based pipeline surveillance while promoting alternative livelihoods through Shell’s flagship youth entrepreneurship programme, Shell LiveWIRE. “Between 2003 when Shell LiveWIRE was launched in Nigeria and now, the programme has trained 7,072 Niger Delta youths in enterprise development and provided business start-up grants to 3,817.