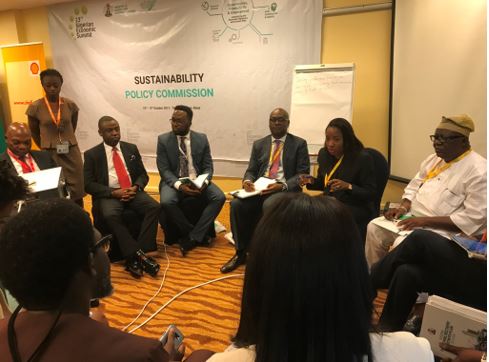 The breakout session looked at, “Low Carbon Investment Opportunities for Economic Recovery and Growth Plan (ERGP) in Niger Delta Communities” as part the key focus in the 2017 edition of the annual Nigerian Economic Summit.

The Summit with a theme, “Opportunities, Productivity, and Employment: Actualizing the Economic Recovery and Growth Plan” is said to be a direct response to government’s plan to strengthen and diversify the nation’s economy.

According to the organisers, it was expected that the ten policy breakout sessions will generate short, medium and long-term plans that will address the challenges of economic inclusion, access to capital, legislation, skills building, and local production.

The 2017 edition was said to be unique, as it marked the first time Nigerian Economic Summit will hold a session on Niger Delta development agenda. And that the action plans drawn up in different sections will be harmonized and shared with all private and public-sector stakeholders. “It is expected that the Federal Government will review and adopt the plans as part of policy guidance towards improvements in the diversification of the Nigerian economy.”

And that given the strategic position the region occupies in the nation’s socio-economic development, it has become expedient that issues on Niger Delta development are discussed by key stakeholders. According to them, “about 32 million Nigerians representing over 40 different ethnic groups live in the Niger Delta. Although the oil-rich region is the source of 75 per cent of Nigeria’s foreign exchange earnings, more than 70 per cent of the population in the region lives on an average of less than US$ 2 a day.

“The region is faced with diverse development challenges. With so much attention and demand on the region and its oil, ironically, the sector provides only 0.01% of Nigeria’s total jobs. Agriculture is still being hampered by low productivity and land-based conflicts in the Niger Delta. Yet, agriculture remains a key sector for unlocking growth for both the region and the whole country, employing approximately 45% of the workforce”.

According to PIND’s Deputy Executive Director Mr. Tunji Idowu, “It is no coincidence that this panel is happening this year, following one of the worst economic recessions that Nigeria has seen.

“The Nigerian government’s Economic Recovery and Growth Plan (ERGP) is designed to put us back on the path of sustained economic growth, presents a unique opportunity for non-oil sector development in the Niger Delta. This will tackle both youth restiveness and employment. We can only ensure the sustainability of the Nigerian economy by focusing on sectors with high-growth potential. That is why agriculture is so important,” Idowu said.

In his remarks, the Director of Special Duties at the Niger Delta Development Commission (NDDC), Dr. Princewill Ekanim, spoke on the Commission’s work and willingness to partner with the private sector on notable projects.

The Country Chair, Shell Petroleum Development Company of Nigeria Ltd (SPDC), Mr. Osagie Okunbor praised the session and the organizers, following the discussions. “I have been listened to the different group sessions and was very impressed with the quality of the recommendations. This was top notch, and I give credit to PIND and MADE for organizing this worthwhile session.”

The external Relations Communications Manager for Shell Petroleum, Sola Abulu noted that the event further brought to fore the problem of access to energy and the need for it to be fixed with homegrown solutions.

“It is all about innovation and coming together to deliver value.” The event also engendered collaboration and partnerships. Among the outcomes of the session, were NDDC and Union Bank agreeing to work together on agricultural development in the Niger Delta.

It was also noted that the Niger Delta-focused organizations at the session expressed pleasure at the outcome of the event and hoped that it will begin a larger effort to mainstream the region into the national conversation on economic diversification.

According to Fidelis Ekom, Advocacy Manager for MADE, “The Niger Delta is crucial to Nigeria’s development, and not just because of oil. Partnerships like ours with PIND and now NESG are important because no organization can address the development challenges facing the Niger Delta alone.”

Present at the events were representatives from energy companies such as Oando; Royal Dutch Shell’s All On; agribusiness firms like Syngenta and Olam; the German development organization, Heinrich Boell Foundation; and States and Federal government representatives from Rural Electrification Agency, Nigeria Incentive-Based Risk Sharing System for Agricultural Lending (NIRSAL), the Presidency and Ministry of Environment, among many others.