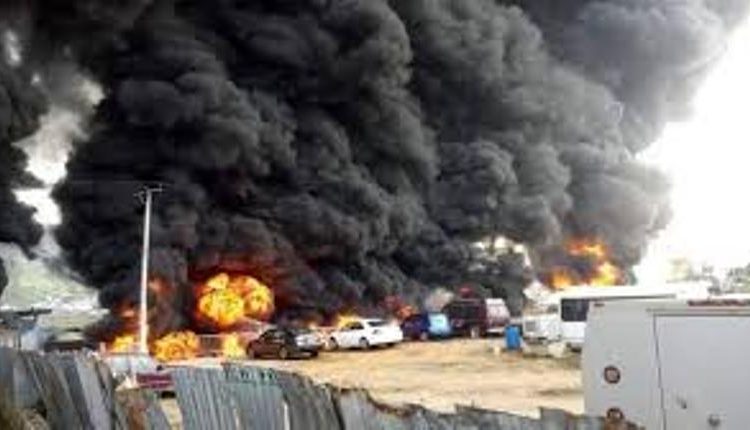 Over 23 Persons Killed in Petrol Tanker Explosion in Lokoja

Nigeria’s President, Muhammadu Buhari, confirmed yesterday that no fewer than 23 persons, including five students of Kogi State Polytechnic and three children on their way to nursery school lost their lives when a tanker loaded with petrol caught fire after hitting multiple vehicles along the Lokoja-Abuja highway, in Kogi state.

Although some independent sources put the figure at 30, Buhari told the press that the tanker owned by the Nigerian National Petroleum Corporation (NNPC), experienced brake failure around 7 am and rammed into five cars, two motorbikes and three tricycles killing all the occupants.

Among those killed and burnt beyond recognition include five students of the state-owned Polytechnic, three nursery school students and passersby.

“The death of 23 people as confirmed by the Federal Road Safety Commission (FRSC), represents another disturbing and saddening incident in the litany of tragedies that have befallen our country,” President Buhari said in a statement.

I am seriously worried about the frequency of these unfortunate and large scale tragedies in the country which cause needless deaths,” he said, pointing to the frequent fuel truck accidents in the country’s poorly maintained roads.

The Nigerian leader urged road users to comply with safety measures in order to prevent such tragedies in future.

Earlier, an AFP journalist who visited the mortuary said he had counted nine bodies in the mortuary while several others suffered severe burns.

“The driver was coming from Okene and heading towards the northern part of the country when the brake of the truck failed on the Lokoja-Abuja highway,” said the French owned medium.

Eyewitness reports said the tanker driver lost its brakes before hitting the targets.

The sector commander of Federal Road Safety Commission (FRSC), Idris Fika confirmed to newsmen that the accident happened shortly after brakes of the tanker loaded with PMS failed and in an attempt to maneuver, fell on its side and smashed five vehicles trying to overtake it in the melee.

The Kogi State governor, Alhaji Yahaya Bello expressed shock over the fatal tanker explosion. A statement issued immediately after the incident by the chief press secretary to the Governor, Onogwu Mohammed said that “Governor Bello is very sad to learn of the tragic loss of lives, many vehicles, property and other valuables in the petrol tanker fire while expressing his deepest condolences to the family of those affected by the ugly occurrence.”

The state deputy governor, Edward Onoja, in a statement issued by his chief press secretary, Promise Emmanuel, expressed shock over the incident.