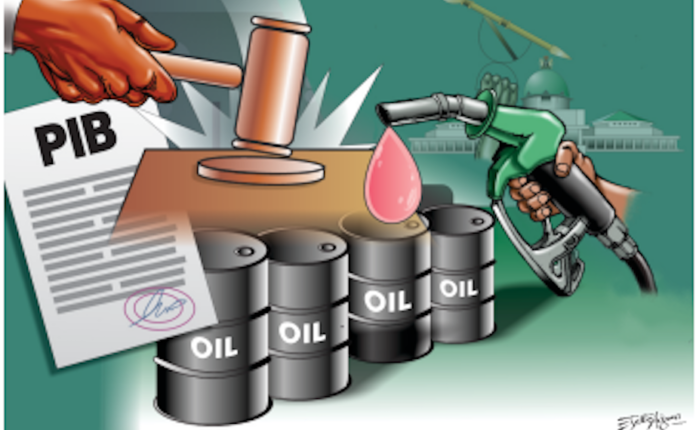 In 2021, the Nigerian oil and gas industry witnessed uncommon activities. From the enactment of the Petroleum Industry Act (PIA) to the declaration of the ‘Decade of Gas’, the sector remained a major hub as Nigeria began to make haste to get as much oil out of the ground before the world moves on from the consumption of fossil fuels. Emmanuel Addeh looks at the year in retrospect and what 2022 holds for the critical sector, which is responsible for roughly 85 per cent of the country’s foreign exchange earnings.

After decades of dilly-dallying, Nigeria finally took the critical step of passing and signing into law the PIA, expected to open up the oil and gas industry and create some clarity around the activities therein.

It was a year that Nigeria began to take gas as a critical resource, announcing the increase of the country’s proven from reserve by over 3 trillion Standard Cubit Feet (TCF).

After a relatively successful “Year of Gas” as announced by the federal government in 2020, it went further in 2021 to declare the ‘decade of gas’, which would culminate in the country being a major producer and exporter of the natural resource by 2030.

To further underscore the seriousness it now attaches to gas, the contract award for the construction of Nigeria’s first Floating Liquefied Natural Gas (LNG), in the country was awarded last year. Promoters of the project say the facility has the capacity to process 176 million cubic feet per day of natural gas, which would add a major layer to the projected growth of the sector.

Although still in the early stages, the Ajaokuta-Kaduna-Kano gas project and other major gas projects going on around the country, will be major game-changers when completed.

In mid 2021 the federal government concluded the bid round for 57 marginal oilfields, the first in close to two decades. In that exercise, about 161 companies emerged winners. The defunct Department of Petroleum Resources (DPR) said the expectation was to rake in $500 million as signature bonuses for the federal government and deepen the participation of indigenous operators in the upstream segment of the industry.

Last week, the Nigerian Upstream Petroleum Regulatory Commission (NUPRC) said that it was set to close out the 2020 marginal field bid round programme, in line with the Petroleum Industry Act 2021 (PIA). The programme started in May. The commission’s chief executive, Mr Gbenga Komolafe, in a notice to participants in the programme, indicated that an in-house work team had already been constituted to deal with all outstanding issues.

In addition, 2021 was the year which saw Nigeria move to strengthen its position as a regional leader in the oil and gas industry with the inauguration of the National Oil and Gas Excellence Centre (NOGEC) in Lagos.
First of its kind in the country, the centre also comprised the search, rescue and surveillance, the command and control centre, national improved oil recovery centre, dispute resolution centre, among others.

In an effort to restore the country’s capacity to refine petrol and other associated products, which has fully collapsed, the Nigerian National Petroleum Company (NNPC) Limited signed a $1.5 billion contract for the rehabilitation of the Port Harcourt Refinery.

With completion set for between 18 and 44 months under a three-phase arrangement, the rehabilitation was awarded to Milan-based Tecnimont SpA.

Furthermore, in 2021, THISDAY broke the news that the NNPC was in the process of acquiring a 20 per cent minority stake in the Dangote Petroleum and Petrochemical Refinery. The financing arrangement for deal which cost the national oil company $2.76billion, would be done in different phases and has various funding arrangements.

In 2021, the enactment of the PIA was unarguably the biggest news in the country’s oil and gas industry. After about two decades in the doldrums, the PIA has now seen the light of the day and it is expected to create an enabling investment environment and codify the regulatory, administrative and fiscal framework for the industry.

The move also saw the scrapping of the existing agencies and their replacement with new ones as well as the inauguration of their chief executives.

Furthermore, NNPC, a corporation hitherto, has now been incorporated under the Companies and Allied Matters Act (CAMA) to become a limited liability company.

Forty four years after its establishment, the NNPC in 2021 declared a Profit After Tax (PAT) of N287 billion for the year for 2020.

The energy transition remains a major existential threat to the hydrocarbons industry. The global coalition to halt the use of fossil fuels to power the world has never been stronger, especial after the United Nations Climate Change Conference (COP 26) in Glasgow, Scotland.

Minister of State, Petroleum, Timipre Sylva, recently described the phenomenon as an existential threat to the oil and gas industry. On the global stage, the energy transition will pose a major obstacle to the funding of oil and gas projects worldwide.

“In fact, a prompt reduction in fossil fuel revenue without sufficient time or support to manage macroeconomic risks and the structural transformation required to build diversified, sustainable and resilient economies could have catastrophic social knock-on effects for millions of people,” Sylva had argued.

The 650,000 barrels per day Dangote crude oil refinery, is expected to begin operations in the first half of 2022. Put at roughly $18 billion to $19 billion, the refinery will produce Euro-V (less sulphur fuels) quality petrol and diesel, as well as jet fuel and polypropylene, generate over 4,000 direct jobs and 145,000 indirect jobs.

It is expected to save Nigeria billions of dollars in foreign exchange as well as ensure energy security for the country. With Nigeria currently refining zero products, the Dangote refinery which will have an annual refining capacity of 10.4 million tonnes (Mt) of petrol, in addition to about 4.6mt of diesel and 4mt of jet fuel, among others, is expected to significantly alter the fuel supply dynamics as well as boost the economy.

In 2020, oil prices hit the negative territory, arguably for the first time in history, with some sellers offering buyers dollars to pick the products from them. Nigeria’s benchmark, Brent, fell below $10, literally throwing the Nigerian economy, largely dependent on revenues from oil, into chaos.

Although economies are opening up and economic activities have since revved up globally, the coronavirus remains a major threat to the oil and gas industry.

With the new variant, omicron compelling countries to enforce restrictions on movement, the virulence or otherwise of the virus will definitely remain a major determinant of oil prices this year.

While it’s been hanging in the air for years, but the argument for full deregulation of the oil and gas industry has never been this strong. If the Petroleum Industry Act (PIA) is activated as prescribed by the law, the removal of subsidy on petrol prices will likely follow.

This will have ripple effects on almost every facet of the Nigerian economy. Organised labour’s has threatened to open the years with a protest march that contains ingredients of economic destruction.

President Muhammadu Buhari remains the defacto Minister of Petroleum Resources. At the head of the NNPC is Mallam Mele Kyari, who will oversee the operations and transition of the national oil company under the new Act. The efficiency with which the top oilman handles the task will either make or mar the process.

Added to that is the role that the industry regulator, the NUPRC as well as its counterpart, the midstream and downstream authority are expected to play in the new changes brought about by the PIA.

The International Oil Companies (IOCs) have recently marshalled strong reasons why it is inevitable that they must divest from fossil fuels with pressure coming from activist investors on the board of these companies.

Shell and Mobil for instance are in talks with the Nigerian authorities on how best to go about selling off their onshore and shallow water assets in preparation for a final exit from exploitation of fossils in the coming years.

Generally, the IOCs account for more than half of the nation’s daily crude production and a quick summary of their reasons for trimming or realigning their operations include onshore operational and security risks.

They have also listed re-balancing of their Nigerian portfolios ; global capital re-allocation; insecurity and sabotage to infrastructure and most recently and even prominently the drive towards renewable sources of energy.

In May last year, Shell’s chief executive officer, Ben van Beurden, while speaking at the company’s annual general meeting, said that Shell could no longer afford to be exposed to the risk of theft and sabotage in Nigeria.

“The balance of risks and rewards associated with our onshore portfolio is no longer compatible with our strategic ambitions,” Shell said.

WILL TRAIN 7 FINALLY TAKE OFF?

With the ground-breaking by President Muhammadu Buhari at the gas company’s plant site on Bonny Island, Rivers State, Train 7 is expected to stimulate the inflow of more than $10 billion Foreign Direct Investment (FDI) into Nigeria.

In addition, it is projected to provide more than12,000 direct jobs and additional 40,000 indirect construction jobs and develop Nigerian local capacity and businesses.

Buhari said the Train 7 project proved that the NLNG and its company’s shareholders – NNPC, Shell, Total, and Eni – a Nigerian company – could operate a world-class business safely, profitably, and responsibly.

Ramping work up on the project this year would be a major boost to the Nigerian economy, which will benefit from the over $10 billion investment.

Why Nigeria’s Power Generation Challenges May Persist in 2022