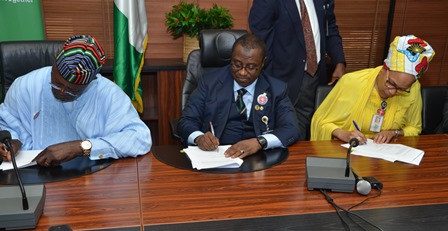 Group Managing Director of the Nigerian National Petroleum Corporation (NNPC), Dr. Maikanti Baru, has said that the corporation doubled the daily supply of Premium Motor Spirit (PMS), otherwise called petrol, from daily 700 trucks (about 27million – 30million) litres per day supply to 80million litres per day since the current hiccup in the supply chain was noticed a few days back.

Dr. Baru, disclosed this shortly before the signing ceremony of a memorandum of Understanding (MoU) between the Corporation and the Benue State Government on the Agasha-Guma Bio-fuels Projects, in Abuja, on Tuesday.

The GMD attributed the hiccups in the supply of PMS to rumours about purported planned increase in the price of petrol.

He stated that some marketers, in their quest to cash in on the situation, suddenly started hoarding products.

“But we swiftly swung into action by doubling our supply nationwide. At the time the rumour started, we had about 30 day sufficiency. The normal daily supply to the nation is 700 trucks, equaling about 27-30m litres per day.

He further informed Nigerians that the NNPC has enough products sufficiency that will last up to 30 days.

Dr. Baru said that at least a billion litre petrol laden cargoes were heading to Nigeria shores at the end of December which he noted would return the Country to a 30-day-plus sufficiency.

Dr. Baru, who expressed joy at PENGASSAN’s call-off of its planned strike, called on motorists not to engage in panic buying as the Corporation has more than enough products for domestic consumption.

Assuring that the fuel situation would soon fizzle out this week, Baru also warned marketers against hoarding, stressing that any filling station found wanting in this regard would lose its entire products to motorists.

He commended NNPC’s sister agencies, the Department of Petroleum Resources (DPR) and Petroleum Products Pricing Regulatory Agency (PPPRA), for their support in helping NNPC tackle the menace of hoarding by filling stations.

While signing the MoU on the Bio-fuels Project with the Benue State Government, Baru said the project would provide employment for the teeming youths in the state.

“I believe that Benue has what it takes to lead the country in the bio-fuels industry. I hope that your state will soon move from food basket to fuel basket of the nation,” Dr. Baru noted.

Earlier in his remarks, Deputy Governor of Benue State, Engr. Benson Abounu, said his state was happy with the signing of the MoU, which he said was a watershed in the nation’s quest to find alternative sources of energy.

He pledged the support of the entire Benue citizens to the project, adding that various host communities for the project would give their 100% for its success.

Expected to create one million direct and indirect jobs for Nigerians on completion, the project will also produce about 84 million litres of fuel ethanol annually.

NNPC plans to mobilize to Site by First Quarter of 2018.