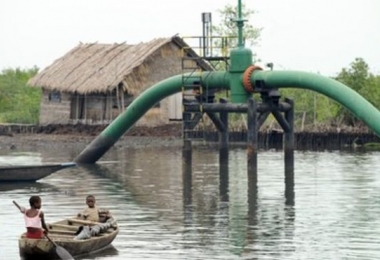 Aiteo Exploration and Production Company has announced a force majeure on Nigeria’s Nembe Creek Trunk Line (NCTL), which exports Bonny Light crude oil. It is the second time the Nembe Creek trunk Line was shut down this year.

The Nembe Creek Trunk Line, a major crude oil transportation channel used for export, evacuates crude to the Bonny Crude Oil Terminal. It is 100 kilometres long and has a capacity of 150,000 barrels per day at Nembe Creek.

Reuters said on Tuesday that the Aiteo company spokesman who announced the shut down did not give a reason for the action. The pipeline is one of two that exports Bonny Light, so the terminal is currently loading only from the Trans Niger Pipeline.

The company had said in a statement that its surveillance comprising the JTF, FSS around NCTL Right of Way near Awoba had confirmed the fire incident. “Our Operations Emergency Response team was immediately activated and following its urgent intervention and containment action, we are constrained to shut in injection as well as other related operations into the NCTL.

In accordance with standard procedure, we requested the other injectors to do the same,” the statement said.

Force majeure is a legal clause that allows companies to cancel or delay agreed deliveries due to unforeseen circumstances. However, in the current incident at the Nembe Creek Trunk Line, Aiteo is yet to state the reasons for the current force majeure.