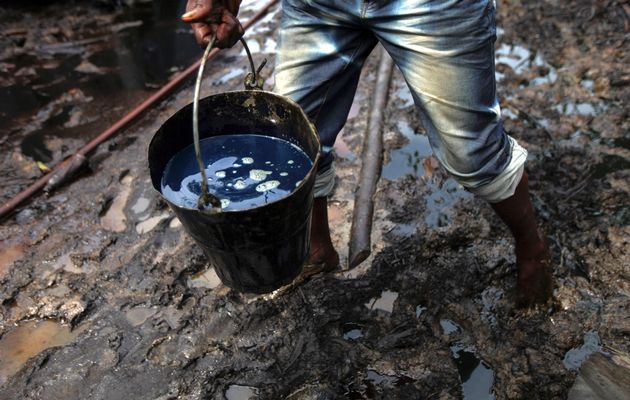 The Nigerian Navy says its personnel have uncovered an illegal oil bunkering site at a ship building yard in Macobar jetty in Port Harcourt metropolis.

The Commanding Officer, NNS Pathfinder, Commodore Sanusi Ibrahim, said one person was arrested at the site which was discovered following a tip-off by a concerned citizen.

Ibrahim, speaking through the base operating officer, Lt. Commander Sunday Baba-Haruna, said thousands of litres of illegally refined diesel and other petroleum products were discovered during the raid.

“For us to ensure that everything is brought under control, we were able to carry out a thorough search of this yard and in that process we discovered almost seven different storage facilities belonging to individuals who are at large.

“For now, we are yet to pick them up. But we were able to pick one person who I believe when we came was sleeping and didn’t know that we there. While others ran away, we picked him. Presently, he is in our custody and we believe he is going to help us during our investigations to know those involved in these activities.”

He also said the illegal bunkering site, which is located close to Ibeto Cement Company, posed a big risk to the company and the residents of the area.

Also Read: Aiteo Not behind Nigerian Protests over illegal Bunkering in the Niger-Delta

He said the Navy will take over the area to ensure that only those engaged in legal businesses operate there.