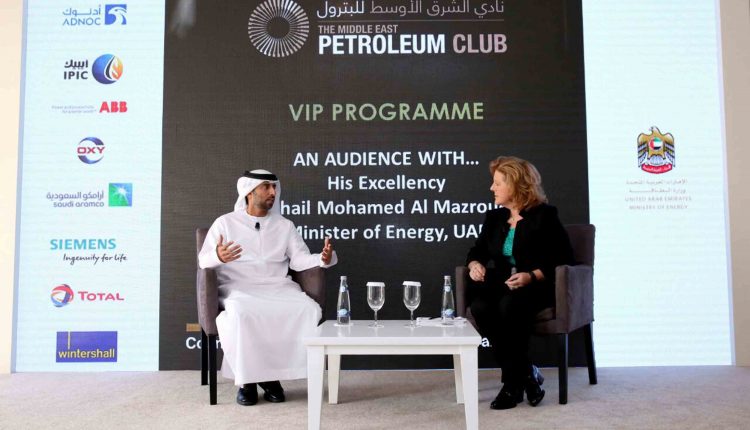 Abu Dhabi, UAE – 9 November 2016 – Oil companies that invest during the current downturn in oil prices stand to profit the most when supply and demand comes back into balance, according to the UAE’s Energy Minister, His Excellency Suhail Mohamed Faraj Al Mazrouei.

Speaking on the sidelines of His Excellency’s Q&A discussion at ADIPEC’S VIP Programme on the UAE’s future energy vision, His Excellency said the long-term demand for oil outstripped supply, and that for companies with strong balance sheets and a long-term view now was the time to invest, not to withdraw.

“The oil industry is inherently cyclical – this is a basic point that often gets overlooked in the short-term noise – and finding an equilibrium between supply and demand is almost impossible,” His Excellency said.

“However, demand has consistently increased, and the business cycle that drives an increase in demand moves much more quickly than the oil industry can expand its capacity for supply.”

His Excellency said around USD 200-billion worth of oil and gas projects had been postponed worldwide because of the fall in prices. With the industry needing between six and nine years to move from discovery of new deposits through to production, the dramatic fall in investment would leave companies making those cuts slow to respond when the market started to rise.

By contrast, those that invested while asset prices were low would be ideally positioned with to meet increased demand with additional capacity, gaining a bigger share of a future rising market.

“The dramatic reaction in reducing investment will inevitably lead to demand coming back into equilibrium, and ultimately exceeding supply in the coming years,” His Excellency said. “We can see the cyclical nature of the industry reinforced before our very eyes. For those companies that are strong enough to hold their nerve and make strategic long-term investments, this is a golden opportunity.”

His Excellency said the very fact that oil had fallen so significantly in price could itself trigger a recovery.  Lower costs acted as an economic stimulus for countries that were net energy importers, supporting growth in the global economy, and ultimately increasing demand in the commodities markets, His Excellency concluded.