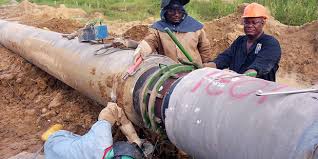 The completion date for Obiafu-Obrikom to Oben (OB3) gas pipeline project has been postponed again because of technical hitches, delaying Nigeria’s hope of boosting gas supply for power generation. The pipeline is meant to transport gas for power generation and other industrial developments in Nigeria.

The project was initially slated for completion in 2017, according to officials of the Nigerian National Petroleum Corporation (NNPC) and Nestoil. There are indications that the likely date for the completion of the project would be end of this year or the first quarter of 2021.

Reports say that at different stages, the project has experienced technical hitches, which delayed efforts to transport stranded gas from the eastern part of the Niger Delta to the western part of the region.

It is believed that some investments that would have been made by other oil companies who connect to the pipeline for the evacuation of their gas have also been stalled. A company like Seplat had signed a Final Investment Decision (FID) on a gas project in anticipation that its gas would be transported through the pipeline but this has not happened.

The company handling the project, Nestoil Limited had blamed heavy floods experienced in the country in last years as being responsible for lack of progress on the project. Reports say the latest challenge for the completion of the project has to do with the crossing of River Niger.

Executive Director of Nestoil Ltd, Mr. Chukweluoka Umeh, said that it is the only company in Nigeria that has an “open hole underneath a 62-inch diameter horizontal directional drilling (HDD) hole, a span of 1.9 kilometres with the pipe going 40 meters below the water bed”.

According to him, with NNPC’s intervention on the project, a company named HDD Thailand has been approached to work with Nestoil so that the pipeline can cross the bed of River Niger. The Thailand company will be bringing special equipment to do the job.

The gas pipeline project was awarded to two companies, Oilserv Limited and Nestoil Limited. While Oilserv has completed its own segment of the pipeline construction since last year Nestoil is still battling on how to get its own segment completed.