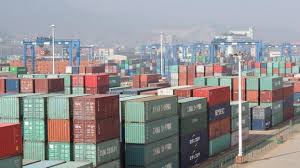 Addressing the new Port Manager, during a brief handover ceremony, Mr. Durowaiye Ayodele (outgoing Port Manager), expressed his appreciation to the various Heads of Departments, for their loyalty and dedication during his tenure. He urged all to continue to support the new Port Manager the way they supported him to succeed.

Mr. Ayodele informed that Onne Port has two major operational areas, which includes Federal Ocean Terminal (FOT), and Federal Lighter Terminal (FLT). He added that Onne Port is not only Oil and Gas Port, but is also strategically located for the generation of revenue for Nigerian Ports Authority (NPA).

Responding, the new Onne Port Manager, Alhaji Alhassan Ismaila Abubakar thanked him for his kind dispositions, and wished him well in his new posting.

He reminded all the departmental heads on the need to work as a team, and solicited for total cooperation for attainment of the goal of Onne Port Management. ‘’Let me state that working with you is going to be very pleasant, because my success is your success’’, he emphasized.

He described the new Managing Director of NPA, Hadiza Bala Usman as a 21st century worker, noting that she is committed to her work, and very passionate about efficiency and revenue generation. ‘’ Let us all help to block all revenue leakages. We should be innovative and committed to our work’’, the helmsman, tasks his HODs.

He also appealed for the general commitment, insisting that there is the need to share information, because nobody knows it all.

Speaking on behalf of the Head of Departments, Dr. Goodluck Okpara, the Chief Medical Officer welcomed the new Port Manager to Onne Port. He said there was a good working relationship between the former Port Manager, officers and staff of the Port.

He thanked the former Port Manager for his kind human relationship and concern towards the welfare of workers and pleaded with the new Port Manager, to follow the steps of his predecessor.

However, the new Onne Port Manager Alhaji Alhassan Ismaila Abubakar is a seasoned technocrat, and well versed in Transport and Logistics Management.

He is a member of Nigeria Institute of Transport Technology (NITT). He is also a professional Transport/logistics Manager with about 29 years of cognate experience in Port Operations/Transport Logistics and cargo handling businesses.

He is a graduate of Ahmadu Bello University, Zaria. He had held several positions since joining NPA. He had served in different capacities. Namely as the Principal Manager Operations, Eastern Ports Headquarters, Port Harcourt; Principal Manager Traffic, Calabar Port before his current posting as Port Manager Onne Port Complex.

Alhaji Alhassan is also a graduate of University of Wales, College of Cardiff, United Kingdom, where he obtained Masters in International Transportation. He is married with children.