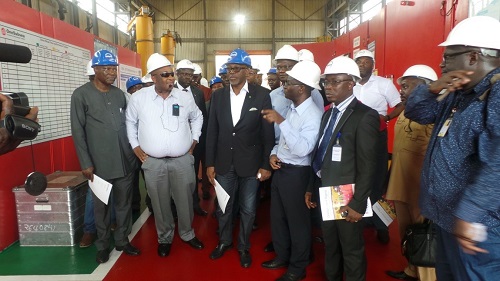 The 20-man delegation was led by the Director of Petroleum in the Ministry of Energy and Mineral Development in the Republic of Uganda, Mr. Ernest Rubondo and the Counselor, Ugandan High Commission in Nigeria, Mr. Nurh Byarufu. Other members of the team included regulators, bankers, oil industry executives among others and they sought strategies for local vendor development, capacity building of their citizens to meet industry standards, ensuring compliance by operating and service companies, transparent bidding process among other subjects.

In his introductory remarks, Rubondo explained that the East African country was at the cusp of investing $20bn in the development of 15 oil fields, construction of a refinery and an export pipe line- projects which were expected to be completed within five years.

According to him, the leadership of the country were determined to retain a substantial part of the $20bn spend within the country and hence their mission to share Nigeria’s experience in local content which would help their country succeed in that regard.

While welcoming the delegation, the Acting Executive Secretary, Mr. Daziba Patrick Obah commended the Ugandan Government for identifying Nigeria as a shining example in the implementation of local content, noting that other African countries like Kenya and Congo Brazzaville had also sought Nigeria’s mentorship of their local content initiatives.

He also extolled the Ugandan officials for deciding to institutionalize local content at the onset of their oil and gas industry as it would guarantee tangible benefits for their citizens aside the revenue that would accrue from the sale of crude oil and gas.

He stated that Nigerian Content had helped the government and the Nigerian people reverse the flight of industry spend to foreign countries in the form of personnel, materials, equipment, fabrication and engineering designs. The Executive Secretary further explained that the Nigerian Government was the driving force behind the implementation process, stressing that strong political will was necessary to overcome powerful forces opposed to the implementation of local content.

He advised the Ugandans to develop robust regulations that are applicable to the state of their industry and technological base while encouraging collaboration with local and international stakeholders to domicile capacity in-country.

The Manager, Strategy and Policy Development Division (SPDD), Mr. Abdulmalik Halilu, while making a presentation, stated that the percentage of Nigerian Content in the oil and gas industry had increased from less than five per cent before 2010 to 14 per cent in 2014 and 35 per cent in 2015. He added that the Board’s interventions were expected increase local content levels to 50 per cent by 2017.

According to him, contracts awarded by operating companies to Nigerian service companies had also increased from about 40 per cent of total contracts before 2010 to 75 per cent in 2015 while the target was to achieve 85 per cent by 2017.

In his remarks, the Director of Monitoring and Evaluation, NCDMB, Mr. Tunde Adelana indicated that Nigeria was the only country that enacted a dedicated law for local content whereas other jurisdictions have local content provisions subsumed in existing laws guiding their oil and gas industry. He encouraged the Ugandans to decide on the model that would encapsulate their local content aspirations.

Also speaking, the Coordinator, Legal Services, NCDMB, Mrs. Rose Chukwuonye advised the Ugandan delegation to take a cue from the Nigerian Content Act, particularly the schedule to the Act which spelt out the tonnages, spend and man-hours that must be executed in the country subject to existing capacity.