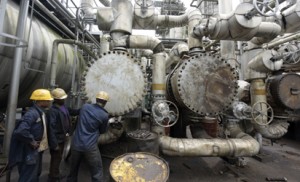 Kaduna – Mr Adewale Ladenegan, Managing Director, Kaduna Refining and Petrochemical Company (KRPC) says privatization is not an option to putting the refinery to optimal use. Ladenegan stated this on Wednesday while interacting with members of House of Representatives Committee on Petroleum Resources (Downstream) on oversight visit to the plant in Kaduna

Ladenegan said what the plant needed was adequate financing to upgrade its obsolete equipment to electronic operations. He said the Plant was not upgraded since it was established in 1982 and the Turn Around Maintenance (TAM) was last carried out in 2008. The Plant was shutdown in January 2018, for lack of crude.

The management blamed vandals, who they said vandalised the NNPC pipelines that transport crude from Warri to the Kaduna plant. The Managing Director, however, said the plant needed massive financing in addition to robust management that would see to its optimal operation.

The NLNG plant at Bonny Island has six processing units (trains) with total processing capacity of 22 million tons a year of LNG and up to five million tons of natural gas liquids (LPG and condensate. According to the KRPC boss, the Nigerian Telecommunication Company (Nitel) and the National Electric Power Authority (NEPA) the Federal Government privatized were not working. “Privatization, I will say no, because all the ones that were privatized, where are the dividends? “Because if we have the opportunity to ask questions, this is the questions we will ask.

“We that you are seeing here are patriotic, we have Nigerians that are running plants in Canada who worked in our refineries here. “If you give the refinery to those who have the money, they will still use the same people. “The option that we will have preferred is that type of NLNG, let everybody contribute and there will be no single person controlling the refinery and we manage it. “Then you will be getting your dividends as at when due and this will take care of your investment and your country people will be there running it, not that you will be bringing people from India to replace Nigerians.

“Instead, you are making the country poorer and then no jobs. “But this one (KRPC) is your own and you make sure that you have a good governance and your people are employed. “Your people are being employed and jobs are not transferred out to other people who will come here to take over or use the children as slaves,” he said.

OPEC has problems with some oil producers, reasons for…

He urged the law makers to provide adequate funds for a complete Turn Around Maintenance (TAM) of the plant. Ladenegan said the Nigerian National Petroleum Corporation (NNPC) was currently negotiating with various financiers to estimate the much the plant needed for the TAM program and its duration.

According to him, upgrading the plant will improve its capacity to operate at 90 per cent. Upgrading the facility, he said, would also stop the importation of refined products and improve the local content of refineries and of the petroleum industry in general.

Ladenegan appealed to the federal law makers to appropriate adequate funds for a comprehensive TAM of the plant in the 2019 budget. He said that, if funds were provided, the plant would resume operation within two years.

The Chairman of the Committee, Mr Joseph Akinlaja who said they were at the plant on oversight visit, promised to ensure adequate measures were taken to return the plant to its past glory. Akinlaja said the National Assembly needed to know the current status and production capacity of the plant.

He said they also needed to know the labour force of the plant as well as how it was being matained to enable them identify areas that needed intervention. He, however, expressed concern that inspite of the various refining facilities in the country producing crude, Nigeria is still importing fuel for local consumption. Akinlaja promised that the committee would ensure adequate funds were appropriated to the plant in the 2019 budget. (NAN) Edo hosts Buhari, as President commissions plant