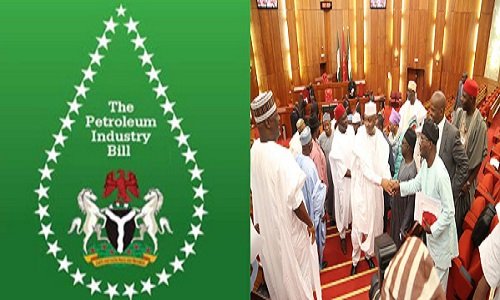 As other aspects of the Petroleum Industry Bill await passage in the National Assembly, oil workers  have expressed concerns over what they described as excessive powers created for the Nigeria Petroleum Regulatory Commission, NPRC, in the proposed Petroleum Industry Administration Bill, PIAB, 2018.

The oil workers under the aegis of Petroleum and Natural Gas Senior Staff Association of Nigeria,  PENGASSAN, and the Nigerian Union of Petroleum and Natural Gas Workers, NUPENG, in their joint position on PIAB presented to the National Assembly, said the powers conferred on NPRC is too enormous such as the power to grant, revoke and extend licences, authorisation to flare gas amongst others.
Chairman, PENGASSAN and  NUPENG Committee on PIB, Mr. Chika Onuegbu, said they are worried that given the wide powers of NPRC, a serving Nigerian President may one day appoint himself/herself as the Chairman of the Commission, adding that the concentration of such powers in one body will create not only unnecessary bureaucratic bottlenecks but also lead to abuse.
The oil workers also demand the outright deletion of the discretionary powers in the Bill given to the President to award oil blocs and license, explaining that such will lead to abuse, as Nigerian Presidents have been known to award oil blocs to their cronies as political patronage.
“You would recall that the major concerns raised by stakeholders against the 2012 PIB was the excessive powers of the Minister. The 8th National Assembly in their bid to address this problem seem to have inadvertently created a very powerful Nigeria Petroleum Regulatory Commission.
“Under the Petroleum Industry Administration bill 2018, the Commission is responsible for the administration of all acreages (Section 3); vested with the power to grant, revoke, renew, modify or extend Licences or Permits including relinquishment of licenses; authorisation to flare gas (Section 34), power to issue regulation detailing the mechanics for the imposition of a domestic crude oil supply obligation on upstream crude producers (section 36) etc.
“In addition, the Petroleum Industry Governance Act 2018 transfers all the powers and duties of the Minister under the Oil Pipelines Act Cap 07 of the Laws of the Federation of Nigerian 2004, Section 28(1) of Hydrocarbon Oil Refineries Act and Sections 3, 4 and 5(3) to the Commission. Also, various provisions of the Petroleum Industry Fiscal Bill 2018 gave enormous powers to the commission.
“The combined powers of the Commission under the Petroleum Industry Governance Bill, the Petroleum Industry Fiscal Bill and the Petroleum Industry Administration bills are too expansive and should be curtailed as the concentration of such powers in one body will create not only unnecessary bureaucratic bottlenecks but can also lead to abuse. As the popular saying goes, power corrupts and absolute power corrupts absolutely.”
They oil workers also appeal to the National Assembly to clearly define in the Bill “good oil field practice” in accordance with international standards, explaining that the phrase which appears vague with no referenced standard or benchmark, may create room for different licensee interpretations and unnecessary debate with the Commission.
“Section 8(7) provides that the President may direct the Commission to negotiate and award Petroleum Licences to qualified investors outside of the bidding process. Although the section explains that any such awards may only be for strategic and bilateral purposes, it may still be subject to abuse.
“More so, as we have had occasions in the past when Nigerian Presidents and their Petroleum Ministers awarded lucrative oil blocks to themselves or their cronies. Routinely also, contracts and licenses are awarded as political patronage or personal favours. This section, though qualified, provides a loophole for the continuation of such abuses. We therefore demand that this section be deleted in its entirety.”
They also appeal to the National Assembly Committee on PIB to carry out a thorough consultation and analysis of the impact of the six-month timeline for the mandatory installation of gas flaring measurement equipment, as enshrined in the Petroleum Industry Adminnistration Bill.
“We  can confirm  from our consultations and  experiences as field workers in the oil and gas fields that it will be very difficult and impracticable  for all ‘existing licensees to install metering equipment at every facility within six months of the commencement of this Act’ as most of the equipment needed to carry out this exercise are not within Nigeria, and  the installation of these metering equipment in most cases will require shutting down of such facilities and this will have a negative impact on the country oil production if the installation is not spread over a time period.”
Mkpoikana Udoma
Facebook Twitter