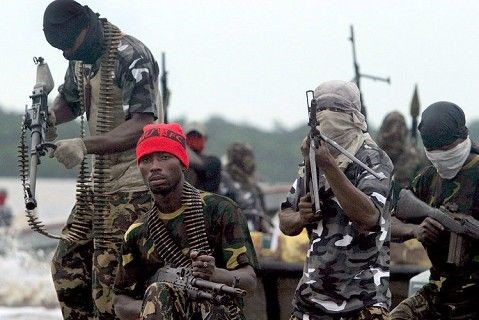 Nigerian Navy Recorded High Arrest of pirates and vandals in 2015

The fight against insecurity in the Nigerian waterways and vandals of petroleum facilities gained successes last year. According to the Nigerian military, 1,610 pirates, militants and criminals in the Niger Delta region were arrested in 2015.

The arrested people were suspected of piracy, illegal bunkering and kidnapping in the region.

According to the officials, security operations started a sharp increase in September 2015. “The announcement comes amid uncertainty over the future of the amnesty agreement between the president and former militants in the region,” PVI said, claiming that former militants staged protests on December 14 in Warri, Delta State amid reports the government was planning to cut the amnesty budget.

The Niger Delta had a quiet five months until October 2015 when armed pirates attacked and boarded a refrigerated cargo ship and kidnapped four crewmembers.

In 2014 alone, six attacks on vessels were reported and 13 crewmembers were abducted in the area for the purpose of ransom.

FG’s plan to power varsities with solar energy on…

The Nigeria Security and Civil Defence Corps (NSCDC), Lagos State Command, also revealed that it arrested 234 suspects in 2015 for vandalism of government’s critical infrastructure and other offences.

The Lagos State Corps Commander, Gabriel Abafi, who made the disclosure while speaking with journalists in Ikeja, said the command contributed immensely to ensuring that critical assets within its domain were protected. “In view of the operation of the command in 2015, the command arrested 234 suspects for vandalism, mostly oil pipelines.

“The activities of the command spread across Anti-Vandalism, Disaster Management, Surveilance/Intelligence gathering and supervision of Private Guards Companies among others. “The command had between January and December in the area of anti-vandalism arrested about 150 suspected vandals who were caught vandalising petroleum pipelines and installations.

“The arrests were made in different locations from Badagry to Isawo-Ikorodu, Amuwo Odofin, FESTAC Town, Ijora Waterfront and Oyingbo in Ebute Meta Waterfront, Igando, Ibeju Lekki/Epe axis and Apapa. “It is pertinent to note that all these areas are prone to vandalism,” he said.

Abafi said the command also arrested some suspects who were involved in adulteration of petroleum products.

“All the petroleum products seized in the course of the arrests so far in 2015 have been transferred to the appropriate authorities for further investigation and prosecution,” he said.

Abafi also said that the command in protecting the national assets ensured that all the electricity and telecommunications installations were protected.

“However, there was vandalism of these installations in different locations in Lagos, especially in Ikeja axis, adding that it was pertinent to note that all the culprits were arrested,” he said.

He said the command ensured that all private guard companies within Lagos metropolis complied with the rules and regulations guiding their operations.

He added that the command sealed about 50 private guard companies which were operating illegally and helped in the registration process and renewal of licenses for some of them.

Abafi noted that within the period under review, the suspected vandals arrested had been arraigned in different courts within Lagos after conclusion of investigation by the command’s Intelligence Unit.

He said the corps had been able to assist in emergency situations in 2015 and thanked other sister agencies which assisted the command for the good of the country at large. He added that the corps would continue to maintain 24-hour security surveillance everywhere.

According to him, the command has mapped out strategies to ensure that the critical assets of government in the state are protected in 2016. “This year, the command will focus especially on Lagos waterways.

“Statistics have shown that majority of the crimes committed within the state are through the waterways. We are mindful of this and we will do our best to curtail it,” he said.

2016 Is Expected To Record Industry-Wide Loss in Container Shipping