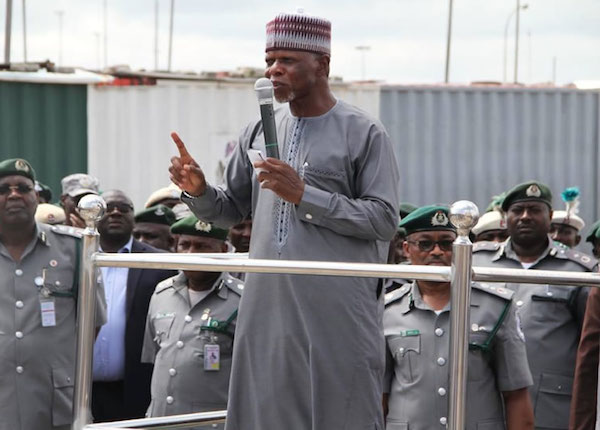 The Nigeria Customs Service (NCS) has impounded 37 new vehicles worth N1.37 billion allegedly smuggled into the country through the land borders. Also seized are Indian hemp and other smuggled goods put at the estimated value of N1.6 billion.

Briefing journalists in Lagos on yesterday, the Comptroller-General of Customs, Col Hameed Ali (rtd)  said the seizures were made by officers and men of the Federal Operation Unit (FOU) Zone A, Ikeja and a compliance team in Lagos.

According to Ali, apart from the impounded of vehicles, the “reinvigorated anti-smuggling operations yielded another 156 assorted seizures including bales of used clothing, indian hemp, used tyres and 12,081 bags of smuggled parboiled rice with Dutp Paid Value (DPV) of N149,007,658”.

“In the face of security and economic challenges, no responsible government will fold its hand while unpatriotic elements continue to engage in illegal activities that will further compress national economic and security well-being of her people.

“NCS as one of the enforcement agencies of Government will continue to work towards ensuring compliance with all extant laws governing inports and exports in Nigeria.

“For those who use violence as instrument of intimidation, let it be known that going forward, NCS operatives will not hesitate to use appropriate force to deal with any threat that is intended to obstruct performance of statutory function.

“I commend the Controller FOU, Zone A and Comptroller in charge of the Compliance team for the effective collaboration and co-ordination of their officers to achieve this feat, Ali said.