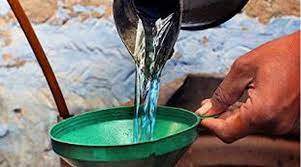 Authorities clamp down on illegal operators

Preliminary report by the Nigeria Midstream and Downstream Petroleum Regulatory Authority (NMDPRA) has confirmed that the kerosene (DPK) fire explosion in Abuja last Friday, which left many persons dead, was caused by an illegal kerosene stand.

The Zonal Operations Controller, NMDPRA, Roselyn Wilkie, told newsmen today (Monday) in a briefing that contrary to earlier suspicions that the fire was caused by bomb explosion, the incident resulted from a Kerosene tank explosion. “Preliminary investigation showed that it was as a result of an electronic spark from a nearby transformer,” she said.

Wilkie said NMDPRA’s investigation, conducted as at November 7, showed that “an electronic spark was transmitted through a wire that traversed the DPK surface tank. It was also discovered that the DPK surface tank owner was operating illegally, as there is no record from the NMDPRA,” she said

Over 12 persons, including the woman who operated the illegal surface tank and her two children, reportedly died in the blast. Victims with various degrees of injuries were sent to the Kubwa General Hospital, also in the outskirts of the nation’s capital

Meanwhile, to compliment the efforts of NMDPRA, the administration of Nigeria’s Federal Capital Territory (FCT), has called members of the public to report any case of illegal installation of operation of kerosene stand anywhere in the Territory. Minister of State, FCT, Dr Ramatu Aliyu, said during her visit to the scene, illegal operators of kerosene stands in the Federal Capital Territory must be sent parking.

“Members of the public should help in this regard. All residents in the FCT are encouraged to report illegal distributors of fuel, kerosene and gas, in undesignated areas, to the appropriate authorities,” the FCT minister said

COVID-19: Nigeria Seeks $7bn From IMF, Others To Reflate…