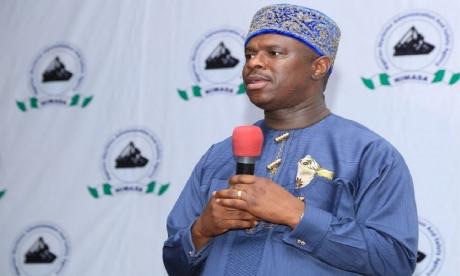 Infrastructure deficit, corruption and lack of enforcement have been identified as the major obstacles on the path to developing Nigeria’s maritime industry.
In a rare convergence of opinion between operators and the government, it was agreed that the industry is not short on relevant laws and regulations but is challenged by the absence of strong institutins to enforce extant policies.
Also Read

Feb 15, 2019
The occasion was at a dialogue organised by Integrity Organisation, a non-governmental organisation (NGO), and ActionAid Nigeria, with the theme ‘‘Nigerian Regulatory Framework in the Transport Sector’’.
In his speech at the forum, Dr Dakuku Peterside, Director-General of Nigerian Maritime Administration and Safety Agency (NIMASA), said infrastructure deficit, corruption and lack of enforcement were part of maritime challenges.
Related Posts

He said while the maritime sector was guided by international regulations it was clear that the enforcement of such existing regulations was lacking.
“I spoke about the fact that the regulations are not the problem. It is perhaps the way we go about enforcing them. However, regulations in the maritime sector are international in nature.
“So, they are literarily the same, apart from a few areas that are different. The challenge in Nigeria therefore is how we go about the enforcement of those regulations. But people can testify that there is a lot of improvement.
“The real challenge in Nigeria is the issue of infrastructure. Our ports were built several years ago, not for the tonnes or capacity they are receiving now. Also, access roads to the ports are bad.
“Most of the ports’ infrastructure are not in place to support growth. The ports are not growing but services or the goods coming into the ports have been growing over time.
“Another problem is the issue of corruption. Nigerians must be unanimous in the fight against corruption, and we shouldn’t be selective whenever we are talking about corruption,’’ he said.
Dr Ene Obi, the Country Director of ActionAid Nigeria, said Nigeria must take the issues of transport regulations seriously.
According to her, Nigeria must prepare to obey the right regulations and be ready to fund the processes of such regulations.
“Nigeria’s debt profile is about 73 billion dollars. What are they spending it for? Who are they spending it on? What is the government doing with that kind of debt profile?
“If it was spent on industries, it would have been better. When we sing `Arise o compatriots’, those leaders that are corrupt, do they actually join in the singing, or take the national pledge?
“Are we taking our National Anthem seriously? Are we taking our patriotism seriously?’’ she asked.
Mr Hassan Bello, the Executive Secretary, Nigerian Shippers Council (NSC), agreed that one of the challenges in the ports was infrastructure deficit.
Bello, who was represented by Mrs. Ifeoma Ezedema, NSC’s Director of Regulatory Service, said the Apapa Port was operating above the capacity it was initially designed for.
He, however, noted that there was the need for private investors to come into the industry, pointing out that government could not do it alone.(NAN)