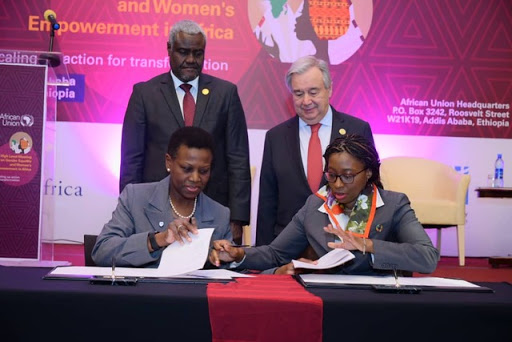 Inclusiveness in investment for the African woman has received a boost as the United Nations Economic Commission of Africa (ECA) and Standard Bank Group at the weekend in Addis Ababa, launched African Women Leadership Fund (AWLF).

Described as a ground-breaking partnership, the AWLF which is targeted at breaking down structural barriers to inclusive investment in Africa and will provide capital to both first time and experienced fund managers in support of United Nation’s Sustainable Development Goals 5 & 8 – Gender Equality and Decent Work and Economic Growth, and African Union Agenda 2063.

The United Nations Economic Commission for Africa in a statement said that the key goal of the fund is to empower women financial leaders who will drive economic growth, job creation, and create prosperity.

It noted that in Africa women-owned funds and businesses struggle due largely to lack of successful fundraising, insufficient exposure to systems and procedures, and lack of track records, among others.

It further stated that women also contend with gender-based social expectation, resistance to women in leadership roles and lack of a support network. Adding that the women will be empowered by giving them access to financial resources and investment management expertise.”

According to ECA, women fund managers will receive a deployment of capital, and subsequently invest in majority female-owned businesses. “Even though the fund is sector agnostic, priority sectors will be education, manufacturing, healthcare, clean energy and agriculture.

“Additionally, technical assistance for fund managers and entrepreneurs will be offered through the initiative. This ranges from building capacity, direct mentoring to leveraging technology in health and education.”

We can now account for every barrel of oil sold, says NNPC

The UN Under-Secretary General and Executive Secretary of ECA, Dr. Vera Songwe said, “We are turning the tables and making women the decision-makers of investable money in Africa. We want women to be on the supply side of money, not only on the demand side.”

“The goal here is to give women-led financial investment activities a huge injection of jet fuel to bear out the proven positive correlation between gender balance, higher financial returns and developmental impact, “he said.

ECA noted that African leaders are taking the leading role in putting her women front and center as part of the efforts to drive the continent’s economic growth through a game-changing fund that invests in women fund managers and also provides technical assistance.

It said that over $20 million was raised for the fund on Saturday that has a current goal of $100 million. President Paul Kagame of Rwanda was instrumental in leading the way, pledging $500,000. Senegal’s President Macky Sall committed $500,000. South African President Cyril Ramaphosa also pledged to contribute to the fund. The private sector participants pledged the rest.

Sola David-Borha, Chief Executive of Africa Regions at Standard Bank Group, said the fund aligns with the Bank’s purpose to drive Africa’s growth and “presents an opportunity for Standard Bank to leverage our footprint and expertise on the continent, and the relevant experience of our asset management arms, Melville Douglas and STANLIB Multi-Managers, to build Africa’s economies. Africa is our home, we drive her growth”.

In his remarks, the Secretary-General Gutteres said, “power is not usually given, it must be taken.”