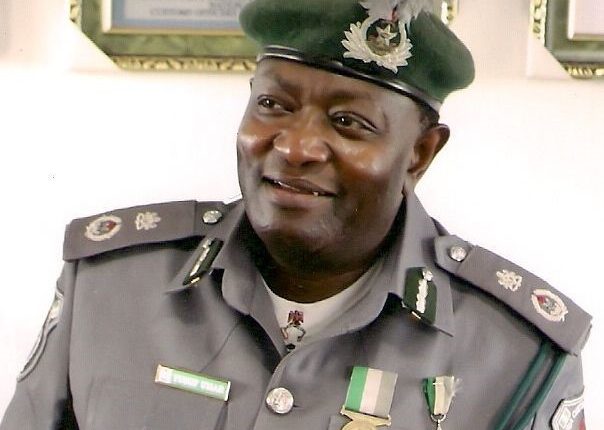 The Western Marine Command of the Nigeria Customs Service in Lagos paraded five foreign nationals suspected to be part of those dealing in smuggled petroleum products in Nigeria.

The command’s Controller, Yusuf Umar, told newsmen that the suspects, all nationals of the Republic of Benin, were intercepted on the high sea with 114 empty drums in their wooden boat.

He said the timely interception prevented their action which, he noted, must have been taking place before now.

“We intercepted a wooden boat manned by foreign nationals from the Republic of Benin in our shores apparently with a mission of bunkering petroleum products out of the country.

“We collaborated with the Nigerian Navy to effect this arrest and we are today handing them over to the Nigeria Security and Civil Defence Corps (NSCDC) for prosecution as directed by the Comptroller General of Customs,” Umar said.

Also speaking, the Lagos State Commandant of NSCDC, Gabriel Abafi, commended the Western Marine Command for synergising with the agency to carry the state duty.

He said the collaborative effort was paying off to make the illegal act unsuccessful for perpetrators.

On hand at the parade also was the Commander, NNS Beecroft, Commodore Abraham Adaji, who condemned the act of petroleum product theft in Nigeria.

Gambia pushes for African integration in oil and gas sector

He also commended the customs command, saying the suspects would be prosecuted appropriately.

“On the night of Thursday Oct. 29, these men were intercepted with 114 drums.

“They came on the invitation of pipeline vandals and they are part of the reason we are experiencing this difficulty they have in distribution of our petroleum products.

“They vandalise the pipelines and load them and take them away, but our commitment is that there will be no vandalism or loss of our heritage to criminals and vandals either local or international.

“We leave the case for further investigation and prosecution “Investigations so far carried out points to the fact that they were invited to continue this same business that has caused us so much pain, Adaji said.

Umar handed over the five suspects and the wooden boat with the drums to the NSCDC.

He also conducted newsmen round to see the 233 bags of smuggled rice worth N1.7 million that the commanded seized.

Umar said the boat conveying the smuggled bags of rice was intercepted around the creeks bordering the Republic of Benin, while the smugglers escaped arrest by abandoning the boat.

The command disclosed to the Assistant Comptroller-General of Customs in charge of Zone A, Charles Edike, during his visit on Wednesday that it had made 38 seizures since January.

The seizures, according to Umar, has a duty paid value of N72.7 million which is approximately 73 per cent increase from the 30 seizures recorded in 2014, valued at N28.8 million.