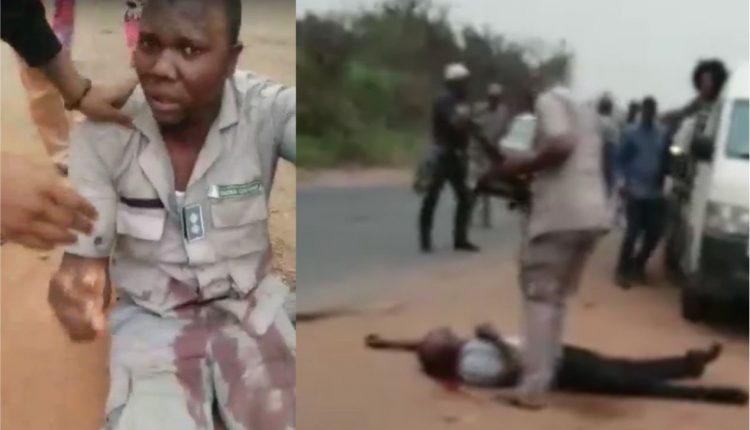 A young man yesterday lost his life in an altercation that ensued between Nigeria Customs Service, NCS and occupants of a traveller bus along Abeokuta-Benin expressway over an alleged demand of N5,000 bribe by the Nigeria Customs officers.

Orient Energy Review Magazine gathered that the deceased was said to be coming from Lagos with other passengers when the officers stopped the vehicle and demanded an N5,000 bribe for some second-hand clothes the bus was carrying.

In the ensuing altercation, one of the officers shot the passenger, a development that infuriated other passengers.

The passengers reportedly mobilised and prevented the officers from leaving the scene, this was after the passengers had disarmed the customs officers.

A video circulating on the social media also showed a woman wailing and accusing Customs officers seen in the video of killing the man “because of N5,000”.

One of the Customs men, identified in the video as the alleged killer, was attacked by the angry passengers.

However, in a swift reaction, NCS who denied the allegation of the killing of anyone over N5,000 bribe said stray bullet killed the victim.

Customs Public Relations Officer, Joseph Attah, in a press statement shortly after the incident, said the man was killed by stray bullet.

“The attention of Nigeria Customs Service has been drawn to a disturbing video going viral with conflicting narratives. While it is painful and totally unnecessary to lose a life in anti-smuggling operations, today at Shagamu interchange along Ijebu Ode, attempt to obstruct lawful performance of duty by passengers of a commercial bus (a white Toyota Hiace) suspected to carrying bales of used clothing led to the death of a young man (Godwin) and serious injury on a Customs Officer, ASC1, Destiny Onebamho.

“Contrary to some narratives, the young man was not a passenger of the bus but a good citizen who always come to fetch water for Customs patrol men anytime they return to the base.

“Preliminary findings indicate that it was during the skirmishes and struggle to disarm the officer that the rifle discharged and hit the friend of the Customs (Godwin) who lost his life. The Service is already in touch with the bereaved family.

“Sadly, it should be noted that while attention shifted to the dead and the wounded, the passengers who filmed with inciting commentaries boarded their vehicle and left, leaving the wrong impression that it was one of them that was killed.

“While the wounded officer is under intensive care at the hospital, the patrol team has been recalled to the office for further investigation,” Attah said in the press release.

Nigerians have taken to their Facebook pages and Twitter handles to condemn the killing of the unarmed man by Customs.

Two weeks ago, no fewer than 40 traditional rulers under the aegis of Yewa Traditional Council in Ogun State threatened to drag Customs to court over the extra-judicial killings of residents in the border towns of the state.

Leading the traditional rulers in the area, the Olu of Ilaro and paramount ruler of Yewa land, Oba Kehinde Olugbenle, lamented that many of their subjects have been killed by Customs operatives.

“We are sad by the spate of harassment, maiming, and killings of our people in Yewa communities and Ogun State by men of Nigeria Customs Service under the guise of pursuing smugglers or raiding of shops where smugglers items are kept,” Oba Olugbenle said.