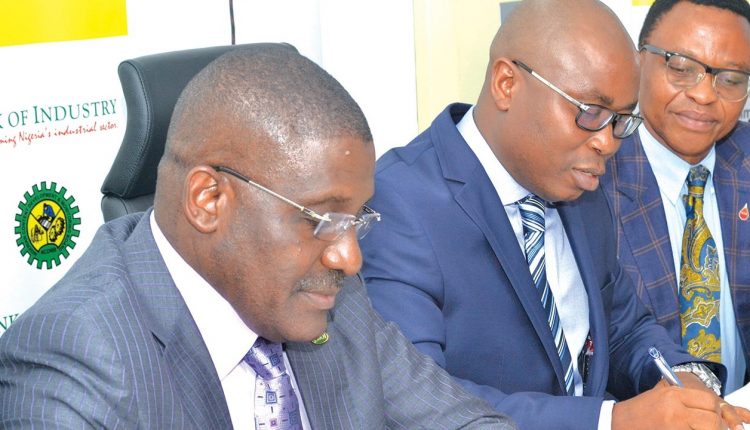 For the Nigerian Local Content Policy to impact positively on the oil and gas industry, more funds must be provided to act as intervening catalyst for growth and industrialization. This was the focus of attention at a stakeholders meeting recently in Abuja, the nation’s seat of power.

Players in the oil and gas service sub sector recently recommended a $600 m local content fund investment as a way out of the current unemployment situation in the land in addition to boosting the production of oil and gas services in the country.

The call was made recently by Bank-Anthony Okoroafor, Chairman of the Petroleum Technology Association of Nigeria (PTAN) on the occasion of the signing of a Memorandum of Understanding (MoU) between the Nigerian Content Development Board (NCDB) and the Bank of Industry (BoI) for the management of the $100m Nigerian Content Intervention Fund (NCIF).

According to the PTAN boss, the said sum of $100m earmarked for the development of the country’s local content, is incapable of injecting life to the critical sector, noting that until more fund is provided; industrialization would continue to take the back seat. The rehabilitation of ports facilities he added would boost industrial activities, thus creating jobs for teeming Nigerians currently battling the scourge of unemployment.

His words, “$100m is too small. I urge the NCDB to bring out $600m so that we can build a big shipping yard. When this is done, we can develop up to 75 per cent local content, create 2000 jobs and build more entrepreneurs.

Mr. Okoroafor went down memory lane to recall the reason for setting up the intervention fund, stressing that while expertise in the oil and gas industry abounds in Nigeria; not much was being done to encourage local participation in the form of men and material resources in the sector. “The purpose of the fund is clear; there are many people with good opportunities and projects but they cannot afford certain equipment and the commercial banks do not encourage entrepreneurs to grow,” he said, pleading for ease of access of the fund in fulfillment of the target objective. He continued, “Please let the process of accessing this fund be seamless, straightforward and simple and let it go to only genuine companies.”

Okoroafor was not the only industry voice that spoke at the event as many experts argued in favour of the fund for the good of the sector and the players alike. Patrick Obah, incumbent Acting Executive Secretary of NCDB who spoke after Okoroafor added that the imperative to give bite to the economy is one of the reasons for setting up the intervention fund, even as he called for support of the collaboration for the synergy between his organization and the BoI. “The MoU between the BoI and the NCDB is a reflection of strong determination of the board to encourage the process of industrialization by closing the gap of financing projects that have high prospects of creating employment and adding value to the economy,” he said.

As it were, there’s no reason to entertain fears as efforts are on the pipeline to ensure judicious use of the fund to enhance industrial growth in Nigeria. This was the submission of the BoI Acting Managing Director, Waheed Olagunju at the Abuja event. “I’m optimistic that the MoU and the partnership between BoI and the NCDB will impact the lives of millions of Nigerians,” he said, noting that the fund “will promote industrial projects in such a way that a link is created between the Micro, Small, Medium and Large scale enterprises such that the output of one can become the input of the other.”

Orient Energy Review gathered that the fund is to be disbursed to benefitting industrialists, equipment manufacturers and oil and gas service companies in the Nigerian oil and gas industry at a single-digit interest rate of 8 per cent with a tenor ranging from one to 10 years and a moratorium of 12 months from the date of the disbursement of the loan.

Without a shade of doubt, this noble initiative would help drive the Nigerian Local Content Policy, if it is sustained especially in the long-run given the accompanied economic incentive of a minimal interest rate.

How I will run NPA-Hadiza Bala Usman