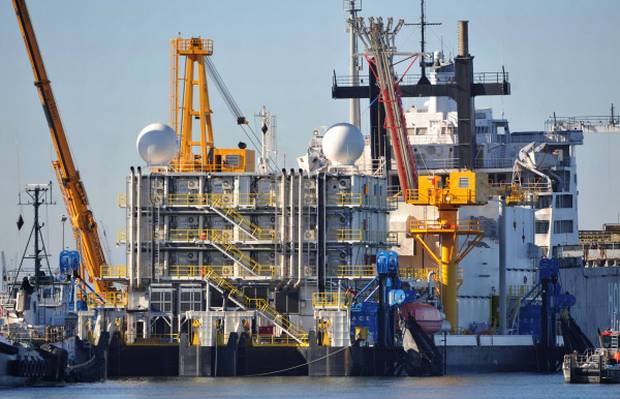 25 New Oil Discoveries Made After Jubilee

Ghana has successfully recorded 25 new oil discoveries within its off-shore maritime boundary, since the historic 2007 oil find by Kosmos Energy.

This was disclosed to our reporter by the Chief Executive Officer of Petroleum Commission, Mr. Theophilus Ahwireng, in Accra on Thursday, after he had made a presentation at the closing session of the ECOMOF 2015 conference, held at the International Conference Centre.

He explained that besides the two main blocks put together to form the jubilee oil field, the 25 other discoveries of oil and gas condensates confirms the rich potential of Ghana in the hydrocarbon industry, hinting that further works are being done towards having commercial production in the next couple of years.

The Chief regulator of the petroleum upstream sector said these discoveries have resulted unitization, the formation of partnerships and other business arrangements, all in line with best practices in the industry.

“We need to be optimistic. There is enough reason for us to look forwards and make positive strides. We have not stopped working to harness our potentials. The achievements made so far indicate that we are on the right path. By continuing on this tangent, this industry can be one of the catalysts to transform the non-oil sectors of our economy,” He said.

Ghana struck oil in 2007, when international experts confirmed laboratory tests that a well, named ‘Mahogany 1’ in the Cape Three Points of Ghana, contained oil and gas condensates in commercial quantities.

Mr. Theophilus Awhireng who was at the time of discovery, the Director of the Geological Department of the Ghana National Petroleum Commission (GNPC) affirmed that the investor interest in adopting modern day technology to drill accounts for the new discoveries.

The risk associated with exploration on the Ghanaian offshore region has significantly reduced following the initial discoveries, and the success made so far points to a further drop.

He was upbeat about the future prospects of Ghana’s oil industry and mentioned that the second oil field in Ghana, (TEN field), which will start production in August 2016 will be followed by Sankofa and Gye Nyame gas production in 2018.

Going forward, the industry expects appraisal and development works on the finds made by HESS Corporation to subsequently proceed and also lead to production of oil and gas.

Ghana recently outdoored its second Floating, Production, Storage and Offloading (FPSO) vessel, christening it MV Professor John Evans Atta Mills. The production vessel is built to kick-start production of oil and gas from the TEN field and is expected to supply about 76,000 barrels of oil per day and an initial gas production of 50 million metric standard cubic feet of gas per day.

In the next five years Ghana is expected to produce 250 million metric standard cubic feet of gas per day and above 190,000 barrels of oil per day. This is besides the huge expectations that the industry has, for the discovery made by Hess Corporation.

Mr. Theophilus Ahwireng said, “These developments will help boost local content participation in the industry, increase government revenue, enhance capacity building of locals and stimulate activities in the services sector”. He asserted that local purchases by the multinational oil companies are increasing as much as the purchasing power of locals involved in the petroleum sector is also increasing