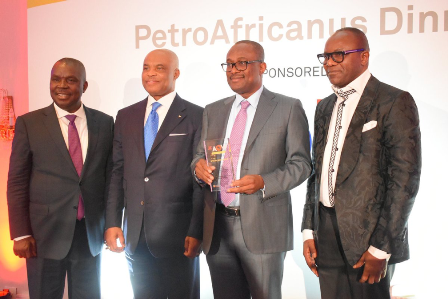 The Executive Secretary, Nigerian Content Development and Monitoring Board (NCDMB), Engr. Simbi Wabote was conferred with a global award of excellence for outstanding contributions to sustainable local content development in Nigeria and across Africa’s oil and gas industry during the 25th edition of African Oil Week (AOW) in Cape Town, South Africa.

The award conferment on Wabote by the organizers of AOW at the PetroAfricanus Dinner was part of the events marking AOW’s 25th anniversary celebration.

Reading his citation, the Conference Director of AOW, Mr. Paul Sinclair, highlighted the considerations for Engr. Wabote’s selection and suitability for the award to include his ongoing unprecedented contributions to localization of industry knowledge and expertise, monumental capacity development programmes in Nigeria with cross border impacts, trenchant advocacy of the imperatives of local content practice and benefits, smart regulations and rare leadership capacity to balance dialogue between international commercial ventures and national interest. He stated that in the 25 years history of AOW, that it was the first time an award was given for Local Content excellence by AOW/ITE Group.

In his acceptance speech, Wabote expressed delight at the honour and recognition. He said that the award was significant as “it communicates AOW’s acknowledgment of the Board’s programmes and strategies for localizing industry knowledge and capacity development”.

Speaking further, the Executive Secretary appreciated President Muhammadu Buhari for giving him the opportunity to serve his country and to champion national economic interest through local content advocacy and implementation under NCDMB banner.

Dedicating the award to the entire staff and management of NCDMB, the ES thanked them for their high sense of duty, patriotism and absolute commitment to local content regime. Adding that, “this award would not have been possible without their constant support for me”.

Other recipients of the AOW Silver Jubilee Celebration awards include to Mr. Conrad Gerber (a posthumous award received by his daughter, Laura); Barbette van Gessel, South African, Chief Executive Officer of Global Pacific & Partners; Founder and President of Global Women Petroleum and Energy Club, Duncan Clarke, Zimbabwean; Founder and Chairman of the Board, Global Pacific & Partners; a private advisory firm based in London and Mr. Samuel Dossou-Aworet; Benin Republic national, a Pan-African Businessman, Founder and Chairman of Petrolin Group recognized for his strategic and pioneering role in the promotion and development of major oil companies and African companies in several African countries including Seplat in Nigeria.