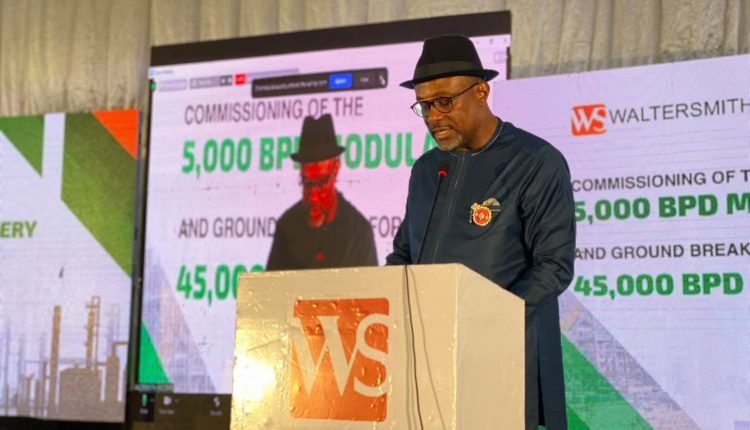 The Nigerian Content Development and Monitoring Board, NCDMB, has announced that it has created a $50 million Research and Development Fund to support research findings that have practical utilization and capability of being commercialized and applied to solve critical problems in the Nation’s economy.

This was made known by the board’s Executive Secretary, Engr. Simbi Kesiye Wabote at a press conference organized on Tuesday in Lagos ahead of its 2nd edition of the Nigerian Content Research and Development Fair which is scheduled to hold on September 9, 2021 at the NCDMB Conference Hall, Yenagoa, Bayelsa State capital.

Engr. Wabote who stressed that no country develops sustainably without focusing on research and development also disclosed that the Board has signed a Memorandum of Understanding to establish Research and Development, R&B, Centers of Excellence in five universities, including Federal Universities of Technology, Minna, Akure and Owerri, Niger Delta University, Amasoma and Modibbo Adama University of Technology, Yola.

He noted that for any researcher to benefit from the fund, he would provide the relevance of the research and its commercial viability, adding that the funds did not require any collateral or guarantor.

Speaking on the scheduled Fair, Engr. Wabote, who noted that NCDMB placed high premium on research and development as a critical enabler in achieving the target of 70 percent local content by 2027 added that the theme of this year’s event is “Creating Sustainable Collaboration in Research and Development for the Energy Sector.”

According to him, the event would feature presentations of research breakthroughs, panel discussions on R&D pillars of success and a special feature on how Nigeria can adopt a sustainable acceleration program for launching innovative ideas into the market.

He outlined the highlights of the fair to include the launching of the NCDMB 10-Year R&D Roadmap by the Minister of State for Petroleum Resources, Chief Timipre Sylva, commissioning of the Technology Innovation and Incubation center established by the NCDMB to facilitate innovation and incubation of ideas for market adoption and launching of the $50 million R&D fund utilization protocol.

The Executive Secretary who recalled that the maiden edition of the R&D fair was organized in 2017 where research breakthroughs were exhibited and linkages were facilitated between researchers and end-users in the Oil and Gas Industry explained that the Board recorded significant progress in elevating the industry collaboration on R&D since the maiden edition.

Power Minister Says Arrival of Power Barges Does Not…

He noted that some of the accomplishments the NCDMB made included the establishment of Nigerian Content Research and Development Council to advise the Board on matters relating to research and development in the oil and gas industry and Development of R&D 10-Year Strategic Road Map, which will be launched during the 2021 R&D Fair.

Other achievements according to Engr. Wabote included the development of frameworks for supporting research breakthroughs to products for industry application, adding that over 20 researchers are currently benefiting from the Board’s intervention.