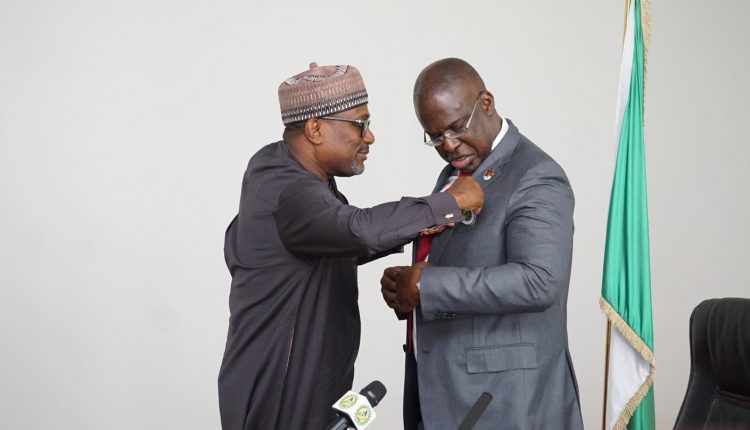 ‘Claims on Sylva Demand of $20m from NCDMB Boss, Spurious’

The Management of the Nigerian Content Development & Monitoring Board (NCDMB) has refuted the claim that the Minister of Petroleum Resources, Chief Timipre Sylva demanded $20 million from the Board for the purpose of funding Bayelsa State Re-Run Elections.

The Board in a statement by its Manager, Corporate Communications, Barr Naboth Onyesoh, described the report published by an online platform as spurious and malicious claim, stating that the story was concocted to malign the Board, its leadership and the Honourable Minister of State for Petroleum Resources, to score cheap political points.

Onyesoh noted that from inception in 2010 till date, NCDMB has never been pressurized or required to sponsor any project that has partisan colouration.

He said, “The attention of the Management of the Nigerian Content Development & Monitoring Board (NCDMB) has been drawn to a spurious and malicious story published by an online medium, titled: “Sylva demands $20 Million From ‘Local Content Board’ Boss to fund Bayelsa Re-Run Elections”.

“We are constrained to react because sponsors of the wicked tissues of lies are intent on tarnishing the good image of the Board and strong reputation of the Executive Secretary, Engr. Simbi Wabote and that of the Honourable Minister of State for Petroleum Resources, Chief Timipre Sylva and portray the Board as partisan.”

Onyesoh said the claim was an outright fabrication sponsored by those angling to contest for the senatorial elections in Bayelsa West Senatorial District and are in the habit of concocting wild allegations to distract the NCDMB and lure the Board into local politics.

He said, “For the avoidance of doubt and to set the records straight, NCDMB wishes to state categorically as follows:

“There is no iota of truth in that story. It is completely mendacious and a figment of the imagination of those behind it.

“From inception in 2010 till date, NCDMB has never been pressurized or required to sponsor anything that has partisan colouration.

“The current Minister of State for Petroleum Resources, Chief Timipre Sylva has never demanded nor suggested to the Board and its leadership to fund any political activity in Bayelsa or any part of the country, however described.

“As a federal agency, NCDMB is focused on its statutory mandate as enshrined in the Nigerian Oil and Gas Industry Content Development (NOGICD) Act.

“The Nigerian Content Development Fund (NCDF) was instituted for funding capacity development in oil and gas activities and cannot be applied for any other purpose except that expressly stated in the NOGICD Act.

“It is preposterous to allege that the Minister is demanding $20m from NCDMB to fund elections, whereas all funds belonging to the Federal Government are in the custody of the Central Bank of Nigeria and NCDMB’s funds cannot be withdrawn except for legitimate purposes consistent with its mandate. Thus it is absurd and unreasonable to contemplate or imagine that the Board can withdraw any money from the NCDF except for any of the purposes it was instituted under the Act.

“The status of NCDMB finances are in the public domain and can be verified by anyone or group that is so interested; and that is why the Executive Secretary has consistently announced the balance sheet and utilization of NCDF at every oil and gas fora.

“Contrary to the wicked suggestion in the story, NCDMB has never awarded any contract to the Minister or any company connected to him and neither has the Board awarded contracts for shore protection in Brass LGA of Bayelsa State because it is clearly outside our statutory mandate

“NCDMB has initiated several oil and gas projects in Bayelsa State and engendered multiple investments that are geared to uplift the people and the economy. Therefore we demand that political gladiators in the state should spare us distractions and negative reportage that are capable of creating disincentive for investments

“NCDMB’s financial processes and operations are always open and transparent. The Board and its leadership have never been manipulated and cannot be influenced to favour individuals or political parties, no matter how highly placed because what the Board does must be in line with its mandate in the NOGICD Act.

“One would have expected POINTBLANK NEWS, if it were a credible media outfit, to conduct a thorough investigation with a view to validating the veracity of the story before going to press. But in this case, it was a mere conjecture by the authors to please their sponsors.

“From the foregoing, it is obvious that this story was calculated to malign the Board, its leadership and the Honourable Minister of State for Petroleum Resources, to score cheap political points and create disaffection.

“Going forward, the Board will not hesitate to take appropriate legal action against any individual or media organizations that publish materials that are spurious, malicious and libelous,” the Board warned.