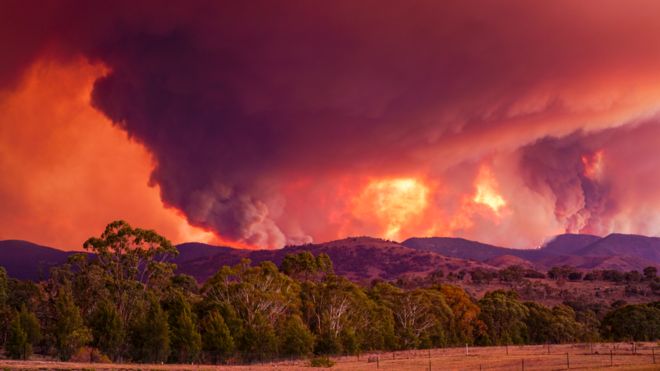 An Australian student has filed a lawsuit against her government for failing to make clear climate change-related risks to investors in government bonds.

It is thought to be the first such case in the world.

Katta O’Donnell, 23, filed the civil action in the Federal Court on Wednesday.

A spokesperson for the Australian Treasury said it was aware of the case, but could not comment on the specifics.

Government bonds are an investment where you lend money to the government.

In return, it promises to pay back a certain sum of money in the future, as well as interest in the meantime.

What is Australia doing to tackle climate change?
How fire burnt through half of Kangaroo Island
The suit comes after wildfires killed at least 33 people and millions of animals last year.

What does the lawsuit say?
“Australia is materially exposed and susceptible” to climate change risks, according to the statement filed with the Federal Court of Australia in Victoria state.

It alleges that the country’s economy and the national reputation in international financial markets will be significantly affected by the Australian government’s response to climate change.

The risks are crucial to an investor’s decision to trade in government bonds and an investor is entitled to be informed of those risks, it adds.

The student is seeking a declaration that the government breached its duty of disclosure and an injunction pausing further promotion of such bonds until it complies.

“O’Donnell the Commonwealth is the first case in the world dealing with climate as a material risk to the sovereign bond market,” her lawyers say on their website.

Who is Katta O’Donnell?
The fifth-year law student, who owns Australian government bonds, studies at La Trobe University and grew up in Healesville in the Central Highlands in Victoria.

Australia fires were far worse than any prediction
How the blazes ‘will be normal’ in warmer world
The area’s forests are vulnerable to the impacts of climate change, particularly higher temperatures and reduced rainfall.

“I want the Australian government to tell the truth about the risks posed by climate change,” she told the Financial Times.

“I don’t want to look towards a future where these types of bush fire are a common occurrence.”

Kenya Power Appoints Female Engineer to its Board