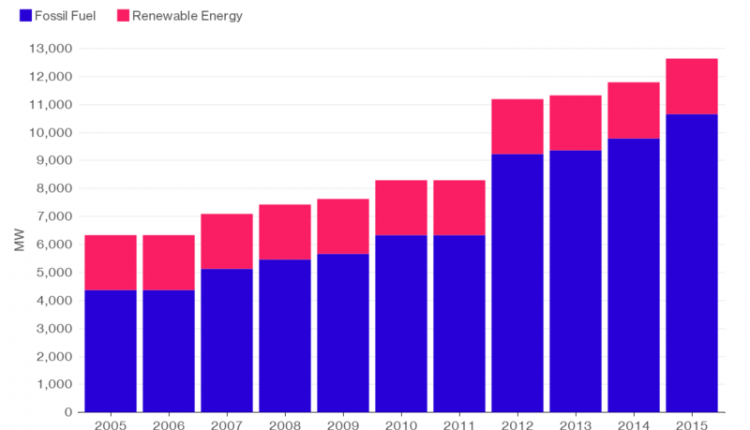 Solar Power May Get Boost From Africa’s Biggest Oil Exporter

Senators in the capital of Abuja are debating allocation of $30 million to solar projects in this year’s budget, according to the Renewable Energy Association of Nigeria. They’re expected to provide funding for off-grid solar projects, photovoltaic manufacturing, and transmission upgrades, according to REAN Executive Secretary Godwin Aigbokhan. A decision is expected this month.

“It just gives you an idea of how the government sees solar as part of the total energy mix,” Aigbokhan said in a telephone interview from Lagos. The country could receive about $2.5 billion of investments in utility-scale solar projects by 2018, he said.

Just months after Nigeria announced plans to issue green bonds for renewable-energy projects, West Africa’s biggest economy is debating how it could deliver clean power to more of its 180 million citizens. It’s part of a growing list of Organization of Petroleum Exporting Countries, including Saudi Arabia and the United Arab Emirates, that are increasing the use of green power.
Nigerian officials say they want to generate as much as 1,200 megawatts of off-grid solar. The country’s households and small businesses currently spend about $21.8 billion each year powering diesel generators to generate electricity, according to a study by German development agency GIZ.

Nigeria has said it wants to increase the contribution of renewables to its energy mix to 23 percent by 2025, from 13 percent in 2015. Interest in solar has already increased, with more than $50 million of Chinese photovoltaic panels imported in the last two years, according to BNEF.

In January, the Niger Delta Power Company signed an agreement with Azuri Technologies to provide power systems for 20,000 rural households living without access to the grid. Nigerian Vice President Yemi Osinbajo said the deal underscored the government’s commitment to providing access to electricity.

Nigerian policymakers, who already privatized state power assets in 2015, are continuing to formulate incentives for utility-scale solar investors, according to REAN’s Aigbokhan.

“There are put-call option agreements in place and partial risk guarantees, so what should stop a foreign investor coming to Nigeria,” he said.

Privatizing the power sector two years ago created room for developers like Erabor Okogun, the founder of Nemoante, to win projects. The Lagos-based solar developer signed a 120-megawatt power purchase agreement with the government in July last year and expects more opportunities.

“Nigeria’s working population is just over 70 million people,” Okogun said in a telephone interview. “Any aspiring industrial nation typically requires about 1 gigawatt of energy for 1 million people, so providing sufficient power to those individuals alone is a 70 gigawatt opportunity.”