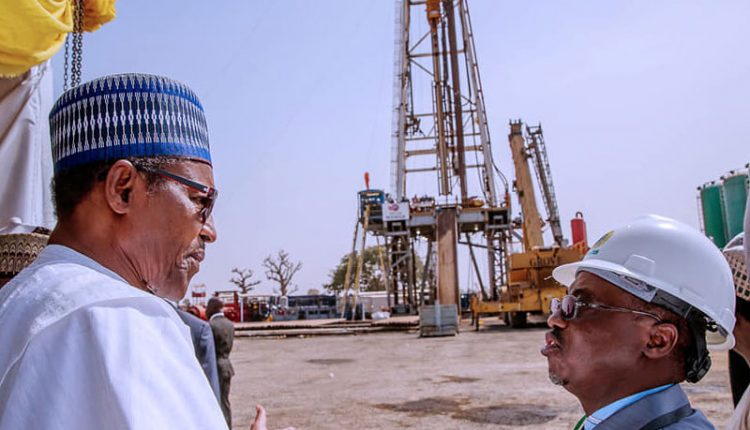 Nigerian National Petroleum Corporation (NNPC) has been mandated to extend its crude oil exploration to six basins in Nigeria. President Muhammadu Buhari gave the directive at Barambu town in the Bauchi State last weekend while flagging off the commencement of activities in the Kolmani-II Oil Well, Gongola Basin, Upper Benue Trough.

The Kolmani River-II Well, of which drilling activities are expected to end in two months, according to contractor handling the project, is one of the four oil and gas wells that NNPC said were being planned for drilling this year on the Gongola Basin to further test the prospects identified around Kolmani River-1, Nasara-1 and Kuzari-1.

The river basins include the Chad Basin, Gongola Basin, Anambra Basin, Sokoto Basin, Dahomey Basin, Bida Basin and the Benue Trough. The President said the exploration in Nigeria’s frontier basins is imperative to the economy of the country.

“I, therefore, have directed NNPC to intensify its campaign in the Chad Basin, to discover new hydrogen to extend the economy of the people within the region and the nation at large. Gas and oil remain critical to the present economic development of our country and the future,” he said.

According to him, the exploration of the river basins remains key to the implementation of our budget at all levels of government. He commended the NNPC for the exploration into Kalmani River II Well, which he said a good beginning, and evidence of hope of success in discovering oil beyond the traditional creeks of the country, and would spur-off socioeconomic activities.

President Buhari said that his passion and association with hydrocarbon research started in Lake Chad as federal commissioner of petroleum and natural resources in 1976. According to him, in his era as federal commissioner, 33 wells were drilled, of which two o them were of gaseous, where Nigerian National Petroleum Corporation acquired 2,000 square meters of land in the basin.

President Buhari commended the national oil corporation and other stakeholders in the Kolmani-II oil well project, also paid tribute to some university lecturers abducted while undergoing research work on the project. He also commended security agents for working tirelessly to ensure that the area was safe to conduct exploration activities.

Orient energy Review gathered that oil prospecting in the Kolmani-II well started some years back, but had to be suspended as a result of the abduction of some university lecturer and other experts working on the project. Shell had in 1999 drilled the first well in the Kolmani Rever-I but according the Anglo Dutch oil giant the amount of hydrocarbon found was not commercial.

In his comments, the group managing director of the NNPC, who was in the President’s delegation during the Kolmani-II flag-off, said however, that the data observed did not go deep enough. “So, we have come here based on the three dimensional seismic and other subsurface reviews and studies that we have done,” Baru said.  He said the Corporation is looking at deep down the distance into the ground, stressing that only drilling would confirm whether there is any resource there and also confirm the current impressions held on the well.

Meanwhile contractor handling the Kolmani-II well, Ethad Oilfield Services, has hinted that the drilling activities will be completed in two months. The well will be drilled by Ikenga Rig 101 owned by Ethad, officials confirmed. Chief executive officer of Ethad, Abdulrahman Bashir, said drillers normally it takes us 60 days to drill a well. “In 60 days you can come back and get feedback from NNPC,” he said during the flag off ceremony.

He pointed out that the fact that an indigenous service company was handling the project was a testimony that local content is really working. “We have only three expatriates here not like before when 50% have to be expatriates on this rig. Most of the engineers on the rig are Nigerians,” he said. Kolmani-II well is designed to be 14,500 feet, deep which would take roughly 60 to 70 days for the NNPC reach its target depth.