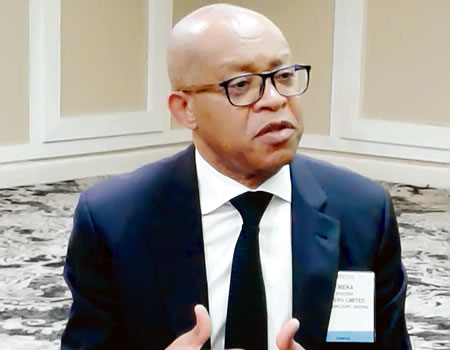 Patrick Egwu, Enugu
The Chief Executive Officer of Oilserv Nig Ltd, Engr Emeka Okwuosa has described Nigeria’s sole dependence on oil as her means of foreign exchange as one of the factors responsible for the country’s economic woes and underdevelopment.
Engr Okwuosa said that the country’s over dependence on oil for many years had led to unemployment, corruption, mismanagement and Infrastructural deficits at all levels in the country.
Okwuosa stated this at the 48th convocation lecture at the University of Nigeria, Nsukka.
Delivering a keynote speech titled “Infrastructural development: key to economic growth and development in Nigeria,” he said “upon our shift from an agro-based economy to crude oil and gas in the 1960s, our economic policies failed to diversify our economy as our continued dependence on import and crude oil sales doomed our development.
“Our economy is structured to be consumption driven depending on imports and have remained undiversified. Oil and gas account for about 95 per cent of exports and foreign exchange earnings and the manufacturing sector account for less than 1 per cent of total exports. Majority of Nigerians remain under the dire burden of poverty, unemployment and inequality. The underperformance of our economy is drastically undermined and has been excerbated by the deplorable infrastructure, corruption, and mismanagement of public funds, lack of visionary leadership and ideas and other extreneous variables.
“Nigeria is losing 69% of it’s budget to servicing local debts. Poor infrastructure, and lack of conducive environment for business staunts our economic growth and development. Nigeria is ranked poorly in the World Bank development index and these have all contributed to all our problems today,” he said.
Continuing, he said “following decades of economic growth that failed to record a concomitant infrastructural development, and the sharp and continous decline in crude oil production and prices, the source of revenue and foreign exchange led to a recession. The economy was in this regard, adversely challenged, negatively impacting government revenue and export earnings, as well as the fiscal capacity to prevent the economy from contracting and starving it of the highly needed funds for infrastructural development. It is regrettably apparent that the economy has remained on a path of steady and steep decline and that this unfortunate trajectory, if not challenged, will constrain economic growth.”
On the problems facing the power sector, he called on the government to build more power plants as a way of improving power supply in the country.
“Recognising that power is an essential element to economic growth and development, I will implore the government to pursue it’s plan to build more power plants. The proposed Mambila hydropower plant must be prioritised. The repositioning of the power sector through the Electric Power Sector Reform Act of 2005, which aims at changing the structure and privatising generation and distribution while retaining transmission under government control, has gained limited success. Presently, Nigeria has 12.5 GW of installed capacity, but less than one-third is operational. Only about 15 per cent of installed capacity is distributed to electricity users, resulting in a huge shortage of electricity supply across the entire industrial and domestic destinations. How can our economy grow and develop under these exigent conditions? The inability of the government regulatory agencies to enforce the rules on distribution companies by making them invest adequately in distribution systems, ensuring collection of payment for electricity supplied to consumers and making payments for electricity supplied by power generation companies, has created a totally broken down value chain in electricity supply.”
He further said the purpose of the lecture is to, “while expressing the widely held opinion that Nigeria has become the potential to become a major power and player in the global economy by virtue of its of it’s human and natural resources endowments, expose the reasons why this potential has remained relatively unachieved.”
While proferring solutions to the problems facing the economy, he said “to achieve this, we must focus on achieving macroeconomic stability and economic diversification. The variance of this stability can only be achieved by undertaking fiscal stimulus measures that ensure monetary stability by improving our external balance of trade with particular focus on the key sectors that I have consistently mentioned in this lecture, will increase investment in other sectors, reduce the ever incessant need for expenditure of foreign exchange for intermediate goods, raw materials and services. This incentive and action will improve our macroeconomic conditions, and Infrastructural development in Nigeria. Encouragement of initiatives by laying solid foundation for our students and encouraging our young graduates to venture into such initiatives will go a long way in infrastructural development of out country, Nigeria.”